A Davis Weather Station was installed  at Thayne Elementary School in September 2010 and has been transmitting data since 3pm  September 22, 2010.  There has been only one interruption of data from the station which occurred from September 28,2011 until October 25, 2011.  On August 15, 2011 the sensors for both soil temperature and moisture were added to the station.

Here are some interesting graphs of some of the data thus far from the station.  Though not able to grab more than a year at a time, this first image is the daily maximum and minimum temperature for the first 12 months:

and the most recent twelve months:

The winter of 2010-2011 saw the temperature dip below zero on 28 days  This past winter there were 40 days  below zero.  December 2011 was particularly cold when 20 days dipped below zero.

In 2011, the first full summer of observations, there were only 6 days when the temperature exceeded 90F.

It is interesting to look at the data which has been collected with the soil moisture and temperature sensors since they were installed last August.

When looking at the sensor located just below the surface, it is surprising to see the large range of temperatures on particularly sunny days.

There were a couple days around 100F last September and even above 80F already this spring.

The current reading of 10 centibars is a very moist soil.  It will be interesting to see how this sensor responds during summer  It can be observed any time on line at
http://www.weatherlink.com/user/thayne/index.php?view=summary&headers=1

For additional information (as to what this measurement suggests) the following  is helpful: 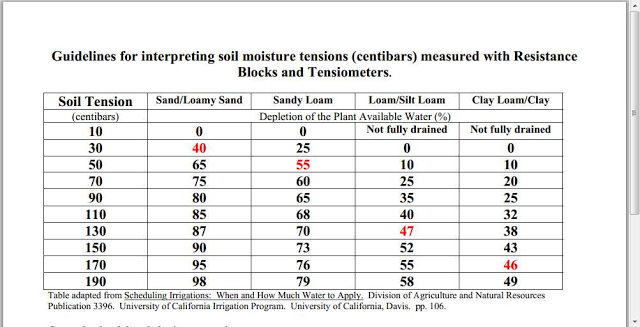