The Davis Weather Station located on top of Etna Elementary started observing on October 12,2010 and has the longest uninterrupted record of the three new stations in the Lower Star Valley.  The data collected from the Etna station includes temperature, humidity, precipitation,  wind direction and speed  along with the barometric pressure.

The purpose of this post is to review the conditions that have occurred since the station  was established, with emphasis on the most recent 12 months.

Relative humidity, which is a function of both the temperature and the moisture(dew point), remains  consistently higher throughout the colder months.

The weather station also measures both the indoor temperature and humidity at the location of the  station console.  In the case of Etna  this is in the administration office.  As would be expected, the temperatures year around remain at a  comfortable level.  However, in the winter months the actual water vapor in the air is quite low, even though the outside relative humidity is typically high.

It is very interesting to look at a cold week beginning January 9, 2012.

This is likely typical of any heated building or home in the winter months in Star Valley. One can conclude that it would be of importance to provide an artificial source of moisture via humidifiers to improve the  indoor environment.

The Etna Rain Gauge has a heater installed, melting the snow that is caught.  The problem during the Winter since the gauge is on the roof of the school the wind that typically accompanies the snow reduces the amount that is actually caught and measured.  Thus the most reliable measurements would occur in the warmer months when precipitation is liquid. The bar graph below shows the monthly precipitation caught:

Wind run is a meteorological term used to categorize or determine the total distance (or amount) of the traveled wind over a period of time. The readings are collected using an anemometer.
Wind run can help to determine the rate of evaporation of moisture over a particular area.

From the data Spring seems to be the windiest period with the least this past December.  The winter low in wind run is reasonable given the amount of time the valley is under an inversion, when winds typically are very light.

In the past 12 months there were two times when the wind gusted above 50 mph. During the cold of December when inversions dominated, winds typically were under 10 mph.

These are the charts for 2011, the first full year of the Etna School Station 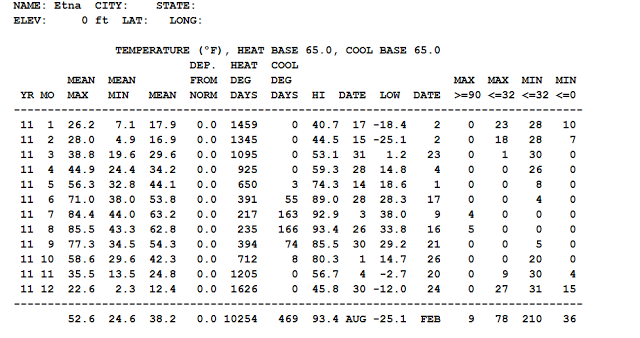 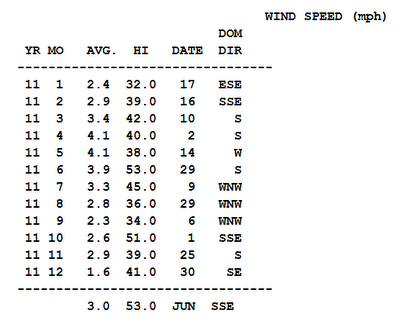