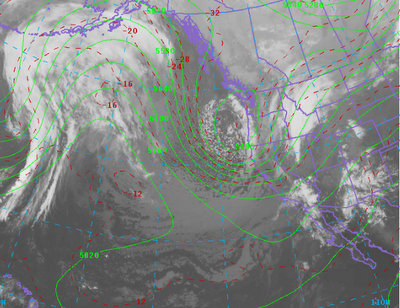 The advertised arrival of Winter weather to Star Valley is on schedule.  While the winds will be up this Thursday afternoon, temperatures will remain relatively balmy. However the mornings satellite infra-red photo clearly shows the major upper low pressure trough and associated cold air that is now moving into the western states.

The following sequence of 700mb charts(around 10,000 feet MSL) graphically shows the cold air spreading eastward across much of the western states  through the weekend.

The model forecast temperatures through the weekend have readings dropping below freezing later this Thursday night  and remaining cold through Sunday.

While the confidence is high on the  cold air arriving  by Friday morning,  the amount of snowfall is still somewhat uncertain.  Initially the system does not contain much moisture,  however as it develops east across the mountain west and is lifted by the terrain, snow will fall.  It now appears that the more significant area of snow will occur across Montana and the higher elevations of Utah and Wyoming.  Here in Star Valley, a few inches are likely to fall over the two day period of Friday and Saturday.