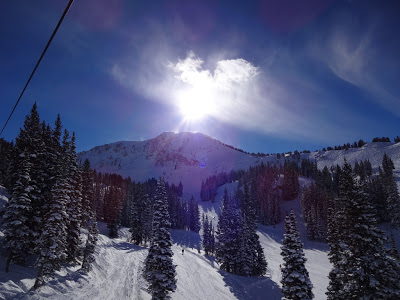 The first week of the New Year will see an absence of significant storm activity in the Star Valley region.  As a result the strong valley inversions that form with the long nights will remain through the afternoon as light winds and the low sun angle will  be insufficient to remove them.

Anyone who visits to the Salt Lake Valley with these inversions in place could experience trapped pollution and gloomy skies.  Jim Steenburgh has issued an interesting blog on the consequences of low sun angle and a stagnant weather pattern.

Blessings and Curses of the Low Angle Sun

Typically in Utah, the greatest threats to snow are wind and sun, so
there’s nothing better than a good early season snowpack combined with a
low-angle sun like we have now.  Only on the warmest days can the sun
do damage this time of year, so powder frequently lingers for days on
most aspects in the backcountry provided it isn’t trashed by the wind.
That doesn’t happen in March, when the sun is almost always bad for
south and west aspects and sometimes can be damaging to all but the
steepest, north-facing slopes.

While the low-angle sun is a blessing for backcountry skiing, it is a
curse for valley residents.  It doesn’t provide enough energy to burn
off cold pools (a.k.a., inversions) that form over the Salt Lake Valley
and other low-elevation regions of Utah.  This is especially true when
there is a fresh snow cover, which reflects a significant fraction of
what little sun we get back to space.

We have just exited a fairly stormy pattern, so while there is a touch
of smog over the valley, the pollution isn’t too bad yet.

That will change in the coming days as we settle into a more stagnant
pattern.  There are a couple of weak systems that brush by early next
week, but it appears they will stir things up only a little, with Salt
Lakers eventually seeing the worst air quality thus far this season as
the week progresses.