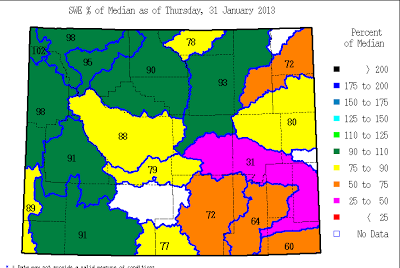 Star Valley’s January was dominated by a cold and rather dry air mass for the first three weeks of the month, ending in several very snowy days. For the month, total snowfall was 28 inches reported by both the Thayne and Star Valley Ranch snow observers, with 22 inches measured by the Smoot Observer.

The snow pack in the mountains of Western Wyoming has improved by the recent snows and again are back to a near normal level.

The following graph of the Willow Creek Snotel, located in the Salt Range provides a comparison with both the snow water equivalent, total precipitation for this season with  both the 2011-2012 season and the 30 year average.

The following are the graphs from four Davis Weather Stations located in the Lower Star Valley showing the daily maximums and minimums.

The Thayne Elementary Solar insolation sensor graph shows that while cold, the first half of the month was generally sunny, compared to the last few days