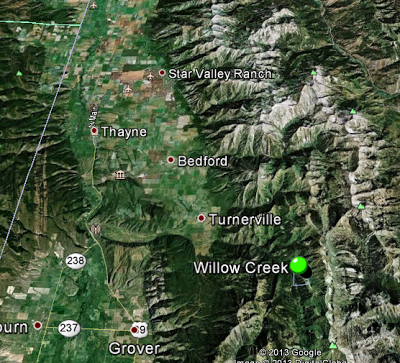 Snow is quickly melting in the lower elevations of Star Valley, and is virtually gone on south and west facing slopes.  The real concern is what does the snow pack look like in the nearby mountains.  This blog will exam the Willow Creek SNOTEL site.  Those who would like to learn more about SNOTEL’s and how they work can check out this link.

The Willow Creek site is located in the Salt Range above Turnerville at around 8400 feet.

The first graph compares this year to date(April 3) to last year and the 30 year average of SWE(snow water equivalent).

The dark blue is this year and green is 2012.  The light blue represents the average for the 30 year period  from 1971-2000.  The last two years are very similar and both significantly below the average.  The snow melt should begin  in earnest though it appears that a cooling trend coming this weekend should slow it some.

The next graph adds on the precipitation to the SWE.
Precipitation is running below normal and less than in 2012 as of April 3.
However we can hope that this summer will not be like the summer of 2012 when virtually
no precipitation of significance occurred.