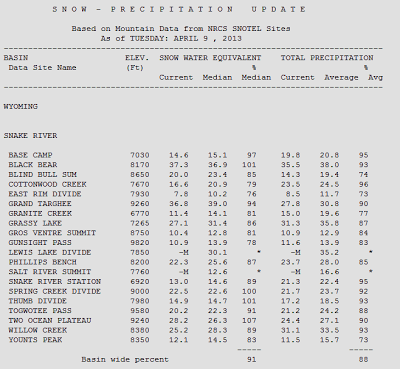 As expected the major impact of the current storm occurred mostly to the south and east of Star  Valley.  While in the lower valley such as Alpine, Star Valley Ranch and Thayne only about an inch of snow accumulated with most of the precipitation falling as rain and very wet snow. Both Thayne and Star Valley Ranch measured around 3/4 inch of precipitation.  Amounts were greater with both rain and snow in the upper valley with Smoot receiving 1.25 inches of precipitation which fell as 11 inches of snow.

The mountain snow pack received a boost with from 1-2 feet of new snow.  The current SNOTEL Report for the Snake River Drainage follows:

While  snow packs are still below normal, the storm was very beneficial.

Star Valley escaped the very storm winds that affected much of Southern and Eastern Wyoming.

Following is a summary of the storm issued by the Riverton WFO this Tuesday afternoon.