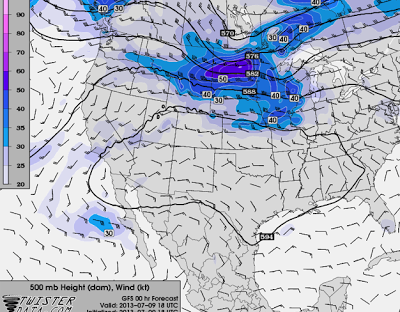 After a very dry June, July is showing encouraging signs for the Cowboy state.  There were several days when much of the state, including Star Valley received beneficial showers. While drier air has returned, this should only be temporary as a new surge of Monsoon moisture is now moving northward into the Southwestern Deserts.

The following 500 mb charts, mid day on tuesday and then again on friday, show the increasing southwesterly flow which will transport moisture back into Wyoming later this week.
The following two charts depict the precipitable water in the atmosphere both for Tuesday and the forecast for Friday,
Thus after a couple warm and dry days, moisture and the increase in thunderstorms should certainly be back into Wyoming by Friday, and possibly later Thursday.
The following was a summary of the first round of Monsoon rains across the Cowboy state issued by the Riverton WFO.

The monsoon season got off to an early start this year, as abundant moisture and instability were in place across Wyoming this week. This provided the needed ingredients, as weak shortwaves rotated around a high pressure center located near the Four Corners, for much needed thunderstorms to form across the area. Some of the thunderstorm activity was widespread across the forecast area for western & central Wyoming, with some storms becoming severe. These storms produced severe hail and in some cases brief heavy rain.  This event is much needed, as noted in the recent climate summary. Many locations have received much below normal precipitation since June 1 and this event will help against these deficits.  So far, only Casper has risen above normal for the year (as well as through June 1). All other locations are well below normal for the year (Lander is near normal for the year, but well below normal since June 1). Below are rainfall totals from Wednesday through Monday. Rainfall Totals thru 7/8