During the summer months, the predominant cloud type over Star Valley and much of the intermountain west is cumuloform.  Heating of the high elevation surfaces common across this area with any available moisture leads to cumulus and cumulonimbus on most afternoons. On some days  the cumulus remain rather benign while other times they build dramatically into cumulonimbus and thunderstorms. The primary discriminatory parameter as to whether cumulus will develop into thunderstorms, given sufficient moisture, is the lapse rates of the surrounding environment.  Following is a good discussion about lapse rates and the role it plays in atmospheric instability in support of cumulus clouds

Air is unstable when the environmental lapse rate is greater than the dry adiabatic rate. Under these conditions, a rising parcel of air is warmer and less dense than the air surrounding it at any given elevation.  Follow up the graph for the rising parcel of air. Note that at any elevation above the surface the parcel temperature is higher than the air that surrounds it. Even as it reaches the dew point temperature at 2000 meters, the air remains warmer than the surrounding air. As a result it continues to rise and cool at the saturated adiabatic rate. Vertically developed clouds are likely to develop under unstable conditions such as this.

On August 13 2013, the environmental lapse rates were near dry adiabatic over Star Valley during the day as shown on the nearest upper air evening sounding at Salt Lake City. This was likely typical of the air mass over Star Valley, even though no upper air observation was available. 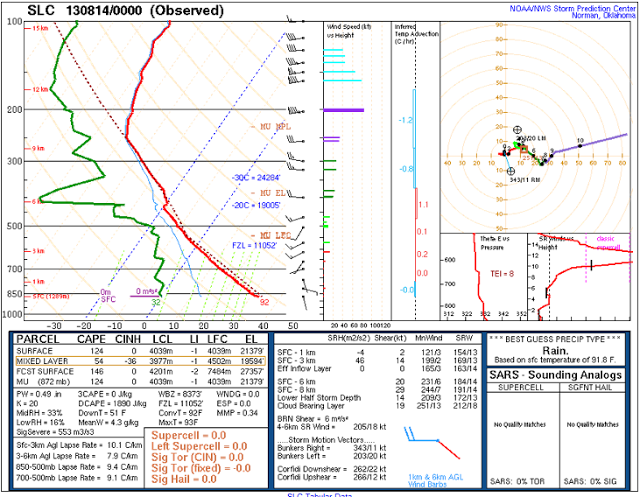 Following is a video taken from the Star Valley Ranch web cam showing the very rapid development of cumulus and then cumulonimbus.

Once the cumulus form, they very quickly grow vertically in the steep lapse rate environment,

Just looking at a two hour period in the early afternoon from both the Star Valley Ranch web cam looking west and the webcam pointed north, clouds grow from inception to full blown cumulonimbus in less than two hours.