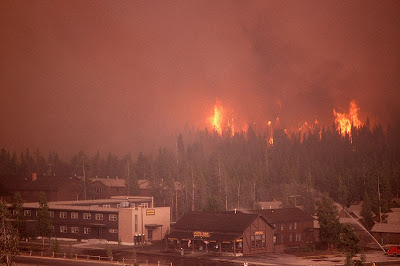 The recent precipitation have considerably lowered the fire threat across Western Wyoming and surrounding areas.  However Sunday, September 8 will mark the 25th Anniversary of the first and only time the entire Yellowstone National Park was closed due to the massive 1988 Yellowstone Fire.

The Yellowstone fires of 1988 together formed the largest wildfire in the recorded history of Yellowstone National Park in the United States. Starting as many smaller individual fires, the flames quickly spread out of control with increasing winds and drought and combined into one largeconflagration, which burned for several months. The fires almost destroyed two major visitor destinations and, on September 8, 1988, the entire park was closed to all non-emergency personnel for the first time in its history.[1] Only the arrival of cool and moist weather in the late autumn brought the fires to an end. A total of 793,880 acres (3,213 km2), or 36 percent of the park was affected by the wildfires.[2]
Thousands of firefighters fought the fires, assisted by dozens of helicopters and fixed-wing aircraft which were used for water and fire retardant drops. At the peak of the effort, over 9,000 firefighters were assigned to the park. With fires raging throughout the Greater Yellowstone Ecosystem and other areas in the western United States, the staffing levels of the National Park Service and other land management agencies were inadequate for the situation; over 4,000 U.S. military personnel were soon brought in to assist in fire suppression efforts. The firefighting effort cost $120 million ($230 million as of 2013). No firefighters died while fighting Yellowstone fires, though there were two fire-related deaths outside the park.
Before the late 1960s, fires were generally believed to be detrimental for parks and forests, and management policies were aimed at suppressing fires as quickly as possible. However, as the beneficial ecological role of fire became better understood in the decades before 1988, a policy was adopted of allowing natural fires to burn under controlled conditions, which proved highly successful in reducing the area lost annually to wildfires.
In contrast, in 1988, Yellowstone was overdue for a large fire, and, in the exceptionally dry summer, the many smaller “controlled” fires combined. The fires burned discontinuously, leaping from one patch to another, leaving intervening areas untouched. Large firestorms swept through some regions, burning everything in their paths. Tens of millions of trees and countless plants were killed by the wildfires, and some regions were left looking blackened and dead. However, more than half of the affected areas were burned by ground fires, which did less damage to hardier tree species. Not long after the fires ended, plant and tree species quickly reestablished themselves, and natural plant regeneration has been highly successful.
The Yellowstone fires of 1988 were unprecedented in the history of the National Park Service, and many questioned existing fire management policies. Media accounts of mismanagement were often sensational and inaccurate, sometimes wrongly reporting or implying that most of the park was being destroyed. While there were temporary declines in air quality during the fires, no adverse long-term health effects have been recorded in the ecosystem and contrary to initial reports, few large mammals were killed by the fires, though there has been a reduction in the number of moose which has yet to rebound. Losses to structures were minimized by concentrating firefighting efforts near major visitor areas, keeping property damage down to $3 million ($6 million as of 2013).

The skeletons of trees burned in the Yellowstone fires of 1988 tower above their offspring seeded by the very flames that destroyed their elders, in a forested area between Norris and Canyon junctions in Yellowstone National Park on Aug. 29 2013.

A quarter century after September snows extinguished the most widespread fires in Yellowstone National Park’s history, the regeneration of the park’s forests remains in its infancy.
The post-1988 forests are not recovered or more in balance, park ecologist Roy Rankin said. He doesn’t like to use anthropomorphic terms like good, bad, devastated or recovered. Fire is simply part of the natural cycle. And today, slowly in some places and quickly in others, the forests are growing back in.
“The forests are fine,” Rankin said. “They are still very young — they’re babies in the stand-regeneration process.
“That’ll continue for another 25 years, and then they’ll move into another phase,” he said.
The ‘88 blazes elevated the discussion about fire policy and educated the public about wildfire’s role in fire-adapted ecosystems. The forests that the fires — the North Fork, Fan, Hell Roaring, Storm Creek, Clover-Mist, Red, Snake Complex, Mink and Huck — left behind are not just younger, but more of a mosaic.
Twenty-five years later, signs of the fires, which affected 36 percent of the 2.2-million-acre park, abound. Branchless blackened trunks tower over meadows and young groves of pine. Fallen trunks litter much of the park’s burnt areas.
The fire scars will persist for years, Rankin said.
“That pattern will be evident on the landscape for, oh jeez, for a long time,” he said. “We’re at a point now where somebody can look at it and really not know what they’re looking at, but that pattern will be evident for 200 years.”
The fires of ‘88 caused little long-term damage to Yellowstone’s man-made infrastructure. They burned 67 buildings. Nobody died inside the park.