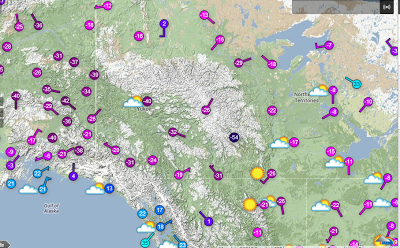 The relatively mild and moist weather the past couple of days is about to change.  A true arctic airmass is moving south to the east of the continental divide in Montana and now entering Northern Wyoming.

To illustrate the purity of the arctic air, following are the temperature plots from this morning from the source region, the Yukon and Northwest Territory Provinces of Canada and eastern Alaska.

Notable are the -20 to -40 below zero over much of the area.  There is a station located in a sheltered valley of the Northwest Territories reporting a bone chilling -54F.

Looking further south the sub zero temperatures have spread across the border into northern Montana to the east of Glacier National Park. 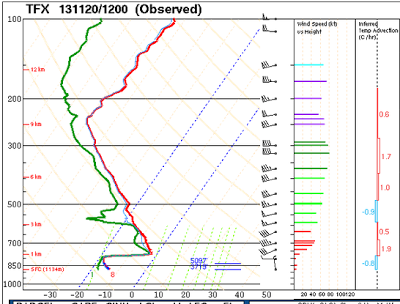 At the time of the sounding the top of the cold air was around 8000 feet MSL.  However with time as the cold air spreads southward and deepens, colder temperatures will envelop much of  Wyoming and Southeastern Idaho by Thursday night.  Following are forecasts for the 850mb temperatures, surface pressure and precipitation for the next couple of days to illustrate the southward push of the cold air on both sides of the Continental Divide.

While Star Valley will likely get some snow this Wednesday afternoon and night, 1-3 inches, the colder, drier air mass will result in clearing skies and dropping temperatures Thursday and Thursday night.  By sunrise Friday it is likely the coldest parts of Star Valley will be seeing the first below zero readings of the Fall.

The weekend should be clear and continued cold with some moderation, but still near zero at night in some locations.