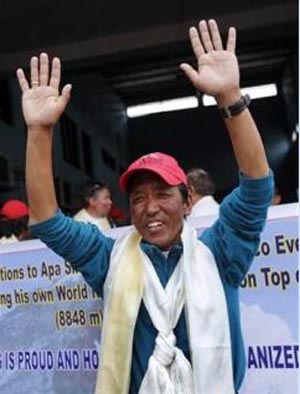 For those who enjoy and pursue the summits in Wyoming, this should be of much interest.

Extreme Weather: The Weather of the Summit of Mt. Everest

By: Christopher C. Burt , 6:04 AM GMT on May 21, 2011
Share this Blog
Short Link
Full Link
4
+
Extreme Weather: The Weather of the Summit of Mt. EverestOn May 11th, Nepali climber Apa Sherpa (a resident of Salt Lake City, Utah) made his 21st successful ascent of Mt. Everest, breaking his own record for the most such by any mountaineer. There is a small window of time used by most climbers for the ascent of the world’s tallest mountain (for now with an official elevation of 29,028’/8848 meters—but measured at 29,035’/8850 meters by the National Geographic Society in 1999). That window of opportunity is the month of May when the jet stream normally shifts to the north of the Himalayan Range and relaxes its icy blast on the summit. In fact, all but three of Apa’s successful climbs of the mountain were accomplished during May.

Mr. Apa Sherpa has reached the summit of Mt. Everest every single year since 1990 except for 1996, 1997, and 2001, a total of twenty-one times. This must be one of the most amazing human feats ever achieved.

Mt. Everest, the tallest mountain in the world at an official 29,028’/8848 meters (it is rising about 2mm each year and the National Geographic Society claims the actual height was 29,035’/8850m as of 1999). The retreating Khumba Glacier, in the foreground, has been a focus of concern so far as the climate change debate is concerned. Photo from Agence France Presse.Mount Everest literally scrapes the top of the troposphere and for those who wish to climb to such heights the weather, of course, is the single most important factor regardless of the equipment or physical condition of an expedition. Every May hundreds of climbers line up to attempt such an ascent during the special ‘window of opportunity’ that the weather provides at this time.Summit WindThe average atmospheric pressure for the summit of the peak is 346mb, not far from the standard 300mb elevation atmospheric chart used to track the position and speed of the jet stream on the planet. During the winter months of November through March the jet stream normally will be flowing in the vicinity of the Himalayas if not directly over them (around 28°N latitude). February has reported the highest summit wind speeds, estimated at 175mph (78 meters per second) as was the case on February 6, 2004. This is believed to be approximately the maximum wind speed to be expected on the summit. Between Oct. 20 and the end of February the summit experiences an average of three out of four days with hurricane force (75mph) or stronger winds. Obviously, it is impossible for someone to stand on the summit in such a wind, so any Everest winter expedition has to be extremely lucky to make it to the top.As the jet stream drifts to the north in March and April the winds diminish and by the end of May there are even times of absolute calm on the peak (although rare!). As a rule of thumb, climbers plan to summit as long as the wind is blowing under 35mph (15 meters per second). Looking at the GFS 300mb chart below for 12Z May 19th we see the wind was blowing at about 20knts (25mph) at the summit level at that time and so perhaps making for a good climbing opportunity (as long as the skies were clear). The summit winds normally stay relatively light throughout the summer months before ratcheting up again in late October as the jet stream slips southward again.

The 300mb GFS northern hemisphere map for 12Z on May 19, 2011. Looks like a good climbing day so far as the wind at summit level is concerned, although a jet impulse to the south may be cause for concern. This a northern hemisphere view with the North Pole at the center of the map and looking south (in all directions) from that perspective.Summit PrecipitationThe actual summit of Mt. Everest probably receives very little precipitation being above the usual condensation/precipitable elevation, and what little that does fall (as snow of course) is usually blown clear of the summit. The Base Camp for climbing expeditions is located at an elevation of 17,600’/5400m and receives an average annual precipitation of 18” (450mm).

This map shows the normal climbing route used from the Everest Base Camp to the mountain summit.Most of the precipitation (at least 80%) falls during the summer monsoon season of June-September. May is usually still dry and thus the other major factor (aside from wind) in making this the most popular month for climbing in the region. The Everest Base Camp lies to the northwest of Mt. Everest itself and is in something of a rain shadow since it is the southerly monsoon flow that provides the bulk of the precipitation that falls in the Himalayas. The area to the southeast of Mt. Everest probably receives as much as 100” (2500mm) of precipitation in favored valleys and ridges below 10,000’ (3,000m).

Maps displaying the topography and annual average precipitation of Nepal. Mt. Everest is located in the very northeast of the country on the border of Tibet.Summit TemperaturesThere is no weather station on the summit of Mt. Everest. The highest meteorological observatory in the area is situated on the South Col at an altitude of 16,568’/5,050m but climbers often carry thermometers on expeditions and we have a general idea of the temperature trends. At no time does the temperature ever rise above freezing. The warmest months, July and August, seem to average around -2°F-0°F (-16°C to -18°C) during the night and perhaps a few degrees above this during the day. I would speculate that the warmest temperature to ever be reached on the summit to be in the 10-15°F (range -10°C to -12°C) on still and sunny days. The coldest months are December-February, with January night temperatures averaging -33°F (-36°C) and the daytime just a couple of degrees warmer if at all. The coldest temperature actually measured on the summit was in February 2003 with a -41.8°F (-41°C) reading. There have been some published reports speculating that the absolute minimum temperature may fall as low as -76°F (-60°C). This seems reasonable when Siberian air spills over the Tibetan Plateau and Himalayan Range. During the peak climbing months of May and October the summit temperature averages -13° to -17°F (-25° to -27°C). The lowest wind chill temperatures are irrelevant since there is little effect beyond wind speeds of 40mph, which are ubiquitous on the summit, and the temperature is almost always below zero Fahrenheit (i.e. the wind chill factor in high wind is ‘off the scale’ well below -100°F).

The highest weather observatory in the Mt. Everest region is the so-called Pyramid site located on the mountain’s South Col at an elevation of 16,568’/5,050m and its real-time data may be found herePyramid Site. Apparently a new research project is underway as I write this to establish a weather observatory at an even higher altitude by this team.Obviously, climbing Mt. Everest is no small feat even for the most experienced climbers (except perhaps for the amazing Mr. Apa Sherpa!). Although some 100 manage to do it every year recently, there are also over 120 unrecovered corpses still littering the mountain’s slopes.

The staggering beauty of the Himalayas is Nepal’s greatest attraction, not just for serious climbers but mountain trekkers as well. Photo by Serge Holmstice.