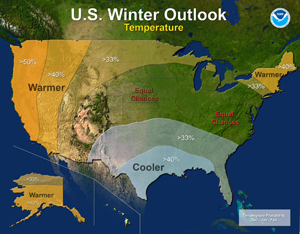 While drought may improve in some portions of the U.S. this winter, California’s record-setting drought will likely persist or intensify in large parts of the state. Nearly 60 percent of California is suffering from exceptional drought – the worst category – with 2013 being the driest year on record. Also, 2012 and 2013 rank in the top 10 of California’s warmest years on record, and 2014 is shaping up to be California’s warmest year on record. Winter is the wet season in California, so mountainous snowfall will prove crucial for drought recovery. Drought is expected to improve in California’s southern and northwestern regions, but improvement is not expected until December or January.

“Complete drought recovery in California this winter is highly unlikely. While we’re predicting at least a 2 in 3 chance that winter precipitation will be near or above normal throughout the state, with such widespread, extreme deficits, recovery will be slow,” said Mike Halpert, acting director of NOAA’s Climate Prediction Center. “This outlook gives the public valuable information, allowing them to make informed decisions and plans for the season. It’s an important tool as we build a Weather-Ready Nation.”

El Niño, an ocean-atmospheric phenomenon in the Tropical Pacific that affects global weather patterns, may still develop this winter. Climate Prediction Center forecasters announced on Oct. 9 that the ocean and atmospheric coupling necessary to declare an El Niño has not yet happened, so they continued the El Niño Watch with a 67 percent chance of development by the end of the year. While strong El Niño episodes often pull more moisture into California over the winter months, this El Niño is expected to be weak, offering little help.

In addition, the Temperature Outlook favors warmer-than-average temperatures in the Western U.S., extending from the west coast through most of the inter-mountain west and across the U.S.-Canadian border through New York and New England, as well as Alaska and Hawaii.

Video: Winter Outlook 2014-2015. (Credit: NOAA)
The rest of the country falls into the “equal chance” category, meaning that there is not a strong enough climate signal for these areas to make a prediction, so they have an equal chance for above-, near-, or below-normal temperatures and/or precipitation.
The U.S. Seasonal Drought Outlook, updated today and valid through January, predicts drought removal or improvement in portions of California, the Central and Southern Plains, the desert Southwest, and portions of New York, Connecticut, Rhode Island and Massachusetts. Drought is likely to persist or intensify in portions of California, Nevada, Utah, Idaho, Oregon and Washington state. New drought development is likely in northeast Oregon, eastern Washington state, and small portions of Idaho and western Montana.

This seasonal outlook does not project where and when snowstorms may hit or provide total seasonal snowfall accumulations. Snow forecasts are dependent upon the strength and track of winter storms, which are generally not predictable more than a week in advance.

NOAA’s mission is to understand and predict changes in the Earth’s environment, from the depths of the ocean to the surface of the sun, and to conserve and manage our coastal and marine resources. Join us on Twitter, Facebook, Instagram and our other social media channels.