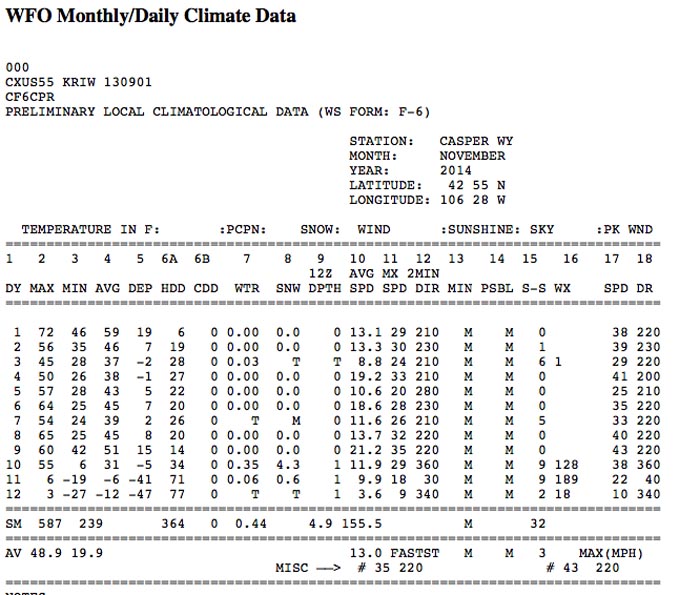 Christopher  Burt,  Weather Historian has posted a blog on this past Novembers World Weather.  Some amazing events occurred  and provides some interesting reading for any weather junky!  This includes the dramatic changes that occurred at Casper Wyoming.

By: Christopher C. Burt , 11:54 PM GMT on December 18, 2014
Share this Blog
Short Link
Full Link
2
+
November 2014 Global Weather Extremes SummaryNovember was globally the 7th warmest such on record according to NOAA and 8th according to NASA (see Jeff Master’s blog for more about this). It was a cold month in the U.S. with some phenomenal lake-effect snowstorms. A powerful storm, dubbed a ‘Medicane’ formed in the Mediterranean Sea. Deadly floods occurred in Morocco, Italy, and Switzerland. It was the warmest November on record for Australia, Italy, Austria and much of Southeast Asia.Below are some of the month’s highlights.NORTH AMERICAIt was the coldest November since 2000 for the contiguous U.S. (and 16th coldest on record) thanks to an exceptional arctic outbreak in the middle of the month. In Casper, Wyoming the temperature fell to -27°F (-32.8°C) on November 12th, its coldest on record for November. Amazingly, this was a drop of some -99°F (55°C) between November 1st, when the temperature peaked at 72°F (22.2°C) tying the record for warmest November temperature ever observed in the city to November 12th when the monthly record low occurred.

The temperature in Casper, Wyoming fell from a November record high (actually a tie for such) on November 1st to a November monthly record low by November 12th. Table from NWS-Riverton.The cold air was mostly confined to the eastern two-thirds of the nation and was most persistent in the Southeast where several sites (Macon in Georgia, Mobile in Alabama, and Gainesville in Florida) endured their coldest or 2nd coldest November on record. Early season snowfall accompanied the cold in the region with Columbus, South Carolina recording its earliest snowfall on record (just a trace officially—although over one inch fell in the suburbs) on November 3rd. This early snowfall occurred one week after a daily record high of 87°F (30.6°C) was observed on October 26th!. Following the cold wave, unusually mild air surged north across the eastern U.S. and Canada where the town of Saint Anicet, Quebec (just southwest of Montreal) reached 21.3°C (70.3°F) on November 24th.In contrast to most of the country, California had its 8th warmest November on record and remains on track for its warmest year ever observed (since 1895). It was also exceptionally mild in Alaska where King Salmon had its warmest November on record (since 1916). McGrath reached 50°F (10°C) on November 12th, a new November monthly record and smashing the previous latest 50°-reading-on-record by 21 days, the previous latest being on October 22nd. One of the most intense extra-tropical storms on record churned through the Bering Sea on November 7-8 when a buoy off the coast of Siberia measured a pressure reading of 929.8 mb. The estimated actual minimum pressure of the storm was said to be as low as 924 mb (27.29”), which would be close to, if not actually, the lowest such ever observed for an extra-tropical storm in the Pacific Ocean.

State-by-state temperature ranking (top map) and precipitation ranking (bottom map) for November. For a wide swath of central and southeastern U.S. it was one of the top 10 coldest Novembers on record.Maps from NCDC.One of the most remarkable features of the month was the tremendous lake-effect snowfall in Wisconsin, Michigan, and New York State. Gile, Wisconsin picked up 48.3” (123 cm) of snow in 72 hours on November 10-13, leading to a November monthly total of 110.6” (281 cm): the greatest monthly snow total in Wisconsin state records (the previous record was 103.5” (263 cm) at Hurley in January 1997. Even more remarkable were the two back-to-back lake effect snows that buried communities just to the south and east of Buffalo, New York between November 18-20. An astonishing 88” (224 cm) was measured in the town of Cowlesville in Wyoming County, and 80” (203 cm) near Hamburg. There were 14 storm-related fatalities including one victim who was literally buried inside his car.

Towns south of Buffalo saw up to 88” of snow fall over a three-day period on November 18-20, one of the greatest lake-effect snowfalls in history for the U.S. Photo by Kyle Duley posted on Twitter.SOUTH AMERICA and CENTRAL AMERICAExceptional heat continued to grip portions of southern South America during the month with Cochabamba, Bolivia reaching an all-time record of 35.6°C (96.1°F) on November 6th and 7th (POR since 1949). What is remarkable about this figure is that Cochabamba Airport (where the temperature was observed) rests at an elevation of 2,550 m (10,039 feet). This would be one the warmest temperatures ever measured on Earth at such an altitude. La Paz Observatory, Bolivia reached 27.1°C (80.8°F), its 2nd warmest temperature on record (the all-time record is 27.2°C/81.0°F set in December 1997).EUROPENovember saw amazingly warm temperatures across much of Western Europe. Many sites broke their all-time November heat records as I blogged about on November 3rd. Late in the month a heat wave again affected the region with temperatures as high as 29.0° (84.2°F) measured at Pollenca, Spain and 26.8°C (80.2°F) at Socoa in France on November 22-24. More heat occurred a week later with a reading of 32.9°C (91.2°F) observed in Capaci, Sicily on November 29th. It was the warmest November on record for Italy (where the temperature averaged an amazing 3.6°C/6.5°F above normal) and also for Austria. France and Switzerland recorded their 2nd warmest Novembers on record.More intense rainstorms lashed Southern France and Italy during the month. Over 300 mm (11.80”) of rainfall fell in just 3 hours at Carrara, Italy on November 5th and 700 mm (27.56”) fell at Malga Maline over 48 hours during the storm. In mid-November more torrential rain and flash floods hit northern Italy and southern Switzerland where a landslide on November 16th killed two and injured four in Davesco near the Swiss city of Lugano.

A landslide killed two and injured four in the Swiss town of Davesco on November 16th following a downpour of 70 mm in just hours. Photographer not identified.Nice, in France, endured its wettest month on record with 503 mm (19.80”) of rainfall measured (previous record was 419 mm/16.50” in September 1992). Yet another round of flooding rain hit southern France and Italy again on November 24-26 with Collobrieres in France picking up 251 mm (9.88”) during the course of the storm and Lugo di Nazza in Corsica 480 mm (18.90”) in 24 hours on November 28th.A powerful tropical storm-like cyclone (called a ‘Medicane’) plowed through the Mediterranean Sea on November 7th passing close to Sicily and Malta where sustained winds as high as 69 mph and gusting to 96 mph were measured. The storms central pressure fell to 979 mb and it took on the appearance of a classic tropical storm (but was not designated as such).

A MODIS satellite image of the “Medicane” on November 7th as it passed close by Malta in the Mediterranean. Image from NASA.In the U.K. it was generally a mild and wet November (the 5th warmest on record since 1910). The warmest temperature observed was 18.7°C (65.7°F) at Writtle, Essex on November 1st and the coldest -4.6°C (23.7°F) at Cromdale, Moray on November 26th. The greatest 24-hour rainfall measured was 122.6 mm (4.83”) at Alltberg House, Isle of Skye on November 6-7.AFRICAThe same late November heat wave that baked sothern Europe also affected portions of North Africa when 33.0°C (91.4°F) was measured at Siirt and Zuara, Libya and 33.5°C (92.3°F) at Djerba Island, Tunisia on November 30th. Deadly flash floods killed at least 32 in southern Morocco near the city of Guelmim during a period of heavy rains in late November. Marrakech was also hit hard with roads washed out and tour buses stranded. Agadir picked up 128 mm (5.04”) of rain in three days November 21-23.

Flooding near the town of Guelmim, Morocco on November 23rd where at least 32 lives were lost. Photo capture from video posted on Facebook by Ayoub Elidrissi.The hottest temperature measured in the northern hemisphere during November was 42.0°C (107.6°F) at Matam, Senegal on November 1st, 6th, and 14th as well as at Linguere (Senegal) on November 4th.ASIASuper Typhoon Nuri became one of the most powerful tropical storms of the year when, on November 2nd, its winds peaked at a sustained 180 mph and its central pressure plummeted to 910 mb. Fortunately, the storm never made landfall and passed well east of Japan before becoming extra-tropical and transforming into one of the most powerful cyclones ever to pass over the Bering Sea between Alaska and Siberia (see North America entry).

Super Typhoon Nuri captured by astronauts on board the International Space Station on November 2nd when the storm was near its peak intensity with 180 mph winds. Image courtesy of the European Space Agency.November saw some extreme cold form over the Arctic Coastal region of central Russia with Norlisk setting a November monthly cold record of -44.9°C (-48.9°F) on November 25th. The coldest temperature measured in the northern hemisphere during the month was -52.7°C (-62.9°F) at Habardino, Russia on November 28th.Torrential rains flooded northeastern Malaysia on November 18-19 with 595 mm (23.43”) measured in Kuala Terengganu and 397 mm (15.63”) at Kota Bharu over the course of 48 hours.AUSTRALIAIt was the warmest November on record for Australia (following the same in October) with the national mean temperature averaging 1.88°C (3.38°F) above normal. It was also drier than usual, with precipitation averaging 22% below normal nation-wide.

Temperature (top map) and precipitation (bottom map) deciles for Australia during November. It was the warmest November on record for the nation. Maps courtesy of the Australian Bureau of Meteorology.A severe thunderstorm pounded Brisbane, Queensland on November 27th with large hail, winds gusting to 141 kph (88 mph) and torrential rain. 50 mm (1.97”) of rain fell in just 15 minutes at Archerfield Airport (with a storm total of 87.8 mm/3.46”). Extensive damage was reported across the city with losses in excess of US$100 million.The hottest temperature measured in Australia and the world during the month was 46.1°C (115.0°F) at Roxby Downs, South Australia on November 22nd and the coldest -6.1°C (21.0°F) at Thredbo, New South Wales on November 2nd. The greatest calendar day rainfall was 108 mm (4.25”) at Nashua (Wilsons River), New South Wales on November 27th.NEW ZEALAND and OCEANIANovember was a relatively normal month weather-wise for New Zealand. The warmest temperature observed was 31.1°C (88.0°F) at Christchurch, South Island on November 22nd and the coldest -3.4°C (25.9°F) at Middlemarch, South Island on November 11th. The greatest calendar day rainfall was 226 mm (8.90”) at Milford Sound, South Island on November 21st. A wind gust of 209 kph (130 mph) was measured at Cape Turnagain, North Island on November 18th.Atuona in French Polynesia recorded a temperature of 36.0°C (96.8°F) on November 20th. This was just short of the all-time heat record for French Polynesia which was 36.1°C (97.0°F) also set at Atuona on December 12, 1972.ANTARCTICAThe coldest temperature in the southern hemisphere and the world during November was –58.2°C (-72.8°F) recorded at Concordia on November 1st.KUDOS Thanks to Maximiliano Herrera for global temperature extremes data and Jeremy Budd and NIWA for New Zealand data.Christopher C. BurtWeather Historian