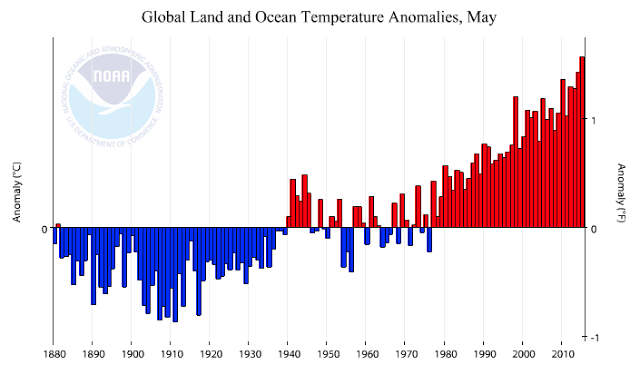 By Jim S
The National Centers for Environmental Information has released the latest climate numbers for May and they are smoking hot.  In fact, last month represents the hottest May in the instrumented record.

And the Northern Hemisphere spring (March–May) was also the warmest on record.

And globally, January–May was the warmest on record.

And also globally, June–May was the warmest on record.

In 1979, the National Academy of Sciences issued a report entitled Carbon Dioxide and Climate: A Scientific Assessment.  Some snippets from the executive summary seem appropriate today.

“For more than a century, we have been aware that changes in the composition of the atmosphere could affect its ability to trap the sun’s energy for our benefit. We now have incontrovertible evidence that the atmosphere is indeed changing and that we ourselves contribute to that change. Atmsopheric concentrations of carbon dioxide are steadily increasing, and these changes are linked with man’s use of fossil fuels and exploitation of land. Since carbon dioxide plays a significant role in the heat budget of the atmosphere, it is reasonable to suppose that continued increases would affect climate.”

“However, the study group points out that the ocean, the great and ponderous flywheel of the global climate system, may be expected to slow the course of observable climate change. A wait-and-see policy may mean waiting until it is too late.”