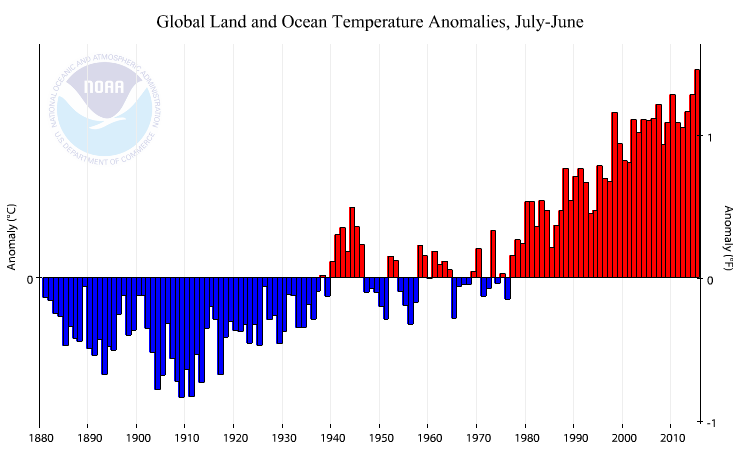 Figure 1. Departure of temperature from average for the globe for 12-month periods ending in June each year, starting in 1880 and ending in 2015. There is no evidence of a long term slow-down in global warming. Image credit: NOAA.For the oceans, the June global sea surface temperature was 0.74°C (1.33°F) above the 20th century average, the highest for June on record, and tied with September 2014 as the highest monthly departure from average for any month. Nine of the ten highest monthly departures from average have occurred since May 2014. Global land temperatures during June 2015 were also the warmest on record. Global satellite-measured temperatures in June 2015 for the lowest 8 km of the atmosphere were the 3rd warmest in the 37-year record, according to theUniversity of Alabama Huntsville (UAH). The lowest 8 km of the atmosphere heats up dramatically in response to moderate to strong El Niño events, with a time lag of several months–as occurred during the El Niño events of 1998 and 2010. Thus, we should see Earth’s lower atmosphere temperature hit record levels late this year and/or early next year.

Figure 2. Departure of temperature from average for June 2015, the warmest June for the globe since record keeping began in 1880. Record warmth occurred across the western United States, parts of northern South America, several regions in central to western Africa, central Asia around and to the east of the Caspian Sea, and parts of southeastern Asia. Western Greenland and some areas in India and China were cooler than average, and northern Pakistan was much cooler than average. Over the oceans, record warmth was observed across much of the northeastern and equatorial Pacific as well as parts of the equatorial and southern Indian Ocean, various regions of both the North and South Atlantic Ocean, and the Barents Sea to the northeast of Scandinavia. Only part of the North Atlantic between Greenland and the United Kingdom was much cooler than average. Image credit: National Centers for Environmental Information (NCEI) .Deadliest weather disaster of June 2015: Pakistan’s brutal heat waveThe deadliest weather-related disaster of June 2015 was an intense heat wave in Pakistan that killed approximately 1,242 people. If these numbers are correct, this year’s heat wave would beat the 1991 heat wave (523 deaths) as Pakistan’s deadliest in recorded history, and would rank as Earth’s eighth deadliest heat wave, according to statistics from EM-DAT, the International Disaster Database. The terrible heat wave that hit India in May 2015 ranks as Earth’s fifth deadliest heat wave:The 10 Deadliest Heat Waves in World History1) Europe, 2003: 71,3102) Russia, 2010: 55,7363) Europe, 2006: 3,4184) India, 1998: 2,5415) India, 2015: 2,5006) U.S. and Canada, 1936: 1,6937) U.S., 1980: 1,2608) Pakistan, 2015: 1,2429) India, 2003: 1,21010) India, 2002: 1,03010) Greece and Turkey, 1987: 1,030

Figure 3. Pakistanis receive ice outside a hospital during heatwave in Karachi on June 24, 2015. A state of emergency was declared in hospitals. Image credit : RIZWAN TABASSUM/AFP/Getty Images.By the time summer is over, it is possible that a third heat wave may be added to this list: the on-going European heat wave. Excess mortality in France, the U.K., and Italy during the late June to early July portion of Europe’s 2015’s heat wave was over 1,200 people: 700 in France, at least 447 in the U.K., and 140 in Italy. Hundreds more probably died in surrounding countries, during some of the hottest temperatures ever recorded in Western Europe. Direct deaths, not excess mortality, are tabulated in the EM-DAT database for heat waves, though, and direct deaths can be a factor of eight less than deaths tabulated by considering excess mortality, as I discussed in more detail in my May 29 post on the heat wave in India. For example, the U.S. National Climatic Data Center (NCDC) and EM-DAT list the total direct deaths from the U.S. heat wave of 1980 at 1,260, but NCDC estimated that the combined direct and indirect deaths (i.e., excess mortality) due to heat stress was 10,000. Extreme heat capable of causing high excess mortality will affect portions of Southeast Europe late this week, when some of the highest temperatures on record will likely occur.

Disaster 1. Severe thunderstorms and torrential seasonal Mei-Yu rains rains inundated northern and southern sections of China on June 7 – 11, killing 16 people and doing at least $2 billion in damage. The provincial regions of Hunan, Guizhou, Hubei, and Gansu were the most severely impacted, with more than 20,000 homes damaged. In this picture, we see houses along a river submerged in floodwaters in Kaili in Qiandongnan, southwest China’s Guizhou province on June 8, 2015. Image credit: STR/AFP/Getty Images.Arctic sea ice falls to 3rd lowest June extent on recordArctic sea ice extent during June 2015 was the 3rd lowest in the 36-year satellite record, and June snow cover was the 2nd lowest, according to the National Snow and Ice Data Center (NSIDC). A large area of high pressure that has set up shop north of Alaska is expected to persist for the remainder of July, and is likely to bring sunny skies and a warm flow of air into the Arctic that will lead to rapid ice loss in the coming weeks. Later this month, low pressure is expected to develop over Northeastern Eurasia, which could lead to the establishment of theArctic Dipole pattern. This pattern of airflow develops in response to high pressure north of Alaska and low pressure over Northeastern Eurasia, and brings large amounts of warm air into the Arctic. The Arctic Dipole pattern occurred in all the summer months of 2007, and helped support the record 2007 summer reduction in sea ice extent (that record was beaten in 2012, a year that did not feature an Arctic Dipole pattern.)Notable global heat and cold marks set for June 2015Hottest temperature in the Northern Hemisphere: 51.7°C (125.1°F) at Death Valley, California, U.S., June 30Coldest temperature in the Northern Hemisphere: -30.0°C (-22.0°F) at Summit, Greenland, June 1Hottest temperature in the Southern Hemisphere: 38.1°C (100.6°F) at Bacabal, Brazil, June 15Coldest temperature in the Southern Hemisphere: -81.3°C (-114.3°F) at Concordia, Antarctica, June 21Major stations that set (not tied) new all-time heat or cold records in June 2015Mercedes, Uruguay, min, -8.2°C, June 19 Durazno, Uruguay, min, -6.8°C, June 19Pukaki Aerodrome, New Zealand, min, -19.8°C, June 23Omarama, New Zealand, min, -21.0°C,  June 24Cartagena, Colombia, max. 40.4°C,  June 24Santa Marta, Colombia, max, 38.6°C, June 24Arjona, Colombia, max, 40°C, June 24Urumitia, Colombia, max, 42.0°C, June 27Riohacha, Colombia, max, 40.0°C, June 29Ashgabat, Turkmenistan, max., 47.2°C, June 29

New all-time national and territorial heat records set or tied in 2015As of July 20, 2015, nine nations or territories have tied or set all-time records for their hottest temperature in recorded history thus far in 2015, and one (Israel) has set an all-time cold temperature record. For comparison, only two nations or territories set all-time heat records in 2014, and nine did in 2013. The most all-time national heat records held by any year is nineteen in 2010. Most nations do not maintain official databases of extreme temperature records, so the national temperature records reported here are in many cases not official. I use as my source for international weather records researcher Maximiliano Herrera, one of the world’s top climatologists, who maintains a comprehensive list of extreme temperature records for every nation in the world on his website. If you reproduce this list of extremes, please cite Maximiliano Herrera as the primary source of the weather records. Wunderground’s weather historian Christopher C. Burt maintains a database of these national heat and cold records for 235 nations and territories on wunderground.com’s extremes page. Here are the all-time national or territorial heat and cold records set so far in 2015:Germany set its national heat record on July 5, when the mercury soared to 40.3°C (104.5°F) at the Kitzingen station in Bavaria.Vietnam tied its national heat record of 42.7°C (108.9.0°F) at Con Cuong on June 30. Palau tied its national heat record of 34.4°C (94.0°F) at Koror Airport on June 14. Venezuela set a new national heat record of 43.6°C (109.9°F) at Coro on June 29. Previous record: 42.0°C (107.6°F) at Machiques, Zulia State in February 1983.Laos tied its national heat record of 42.0°C (107.6°F) at Thakhek on June 20.Ghana set a new national heat record of 43.3°C (109.9°F) at Navrongo on June 10. This is the third time this year Ghana has tied or set a new all-time heat record. Previous records: 43.1°C (109.6°F), set the previous day, on June 9, and 43.0°C (109.4°F) on February 12.Cocos Islands (Australian territory) tied their all-time heat record with 32.8°C (91.0°F) on June 8.Equatorial Guinea set a new national heat record of 35.5°C (95.9°F) at Bata on March 17. Previous record: 35.3°C (95.5°F) at Malabo in February 1957.Wallis and Futuna Territory (France) set a new territorial heat record with 35.5°C (95.9°F) on January 19 at Futuna Airport.Israel set a new national cold record of -14.2°C (6.4°F) at Merom Golan on January 10.Special Mentions: Antarctica set a new heat record for its mainland of 17.5°C (63.5°F) at Esperanza Base on March 24. Previous record: 17.4°C (63.3°F) at Marambio Base, set the previous day. The World Meteorological Organization (WMO) has appointed a committee to study this event and determine if this represents an official record for the continent. Note that this is a record for mainland Antarctica, not a territorial or continental record. The all-time maximum record for the continent and territory of Antarctica is 19.8°C (67.6°F) on January 30, 1982, in Signy Island, South Orkney, an island group located about 450 miles northeast of the tip of the Antarctic Peninsula, the northernmost portion of mainland Antarctica. Geologically, the South Orkney are on the Antarctic plate, and politically, they are part of Antarctica. This record was improperly listed as a territorial record for Antarctica in last month’s global summary.Switzerland had its highest reliably measured temperature on record in Geneva on July 7, when the mercury hit 103.5°F (39.7°C). The only higher temperature ever measured in the country was a 106.7°F (41.5°C) reading on August 11, 2003 at Grono. As reported at the Swiss news site swissinfo.ch, this old record was achieved “using an old measurement technique of weather huts, which generally recorded temperatures a few degrees higher than modern instruments.” Weather records researcher Maximiliano Herrera agrees that this year’s 39.7°C reading in Geneva is the highest reliably measured temperature ever in Switzerland, though the August 11, 2003 temperature at Grono was probably warmer (near 40°C), after correcting for the known problems with the site. Mr. Herrera originally listed Samoa as tying its national heat record with 36.5°C (97.7°F) on January 20 at Asau, but a subsequent review of the record revealed possible issues with the measurement equipment, so this record is dubious.Kudos also to Mr. Herrera for supplying the data for the “Notable global heat and cold marks set for June 2015” and “Major stations that set (not tied) new all-time heat or cold records in June 2015” sections.Jeff Masters