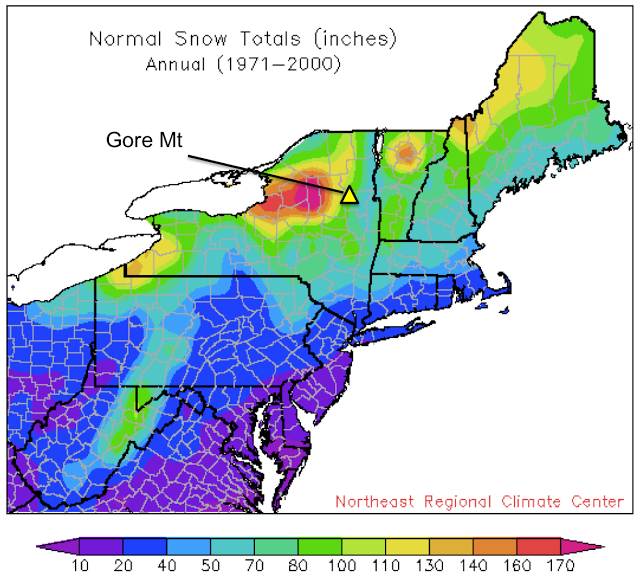 Jim Steenburg’s( UofU)  blog on snowy areas that are the result of unique micro-climates is of interest.  Here in Star Valley the most favored micro-climates for heavy snow are more subtle, but one region that appears to have a maximum of snow is the Turnerville area where northwesterly flow is lifted  by the higher terrain on 3 sides.

By Jim S
A microclimate refers to the unique meteorological conditions that occur at a given location or area.  Mountainous regions tend to produce a plethora of microclimates due to the strong influence that complex terrain has on meteorology.  Below are my top-10 U.S. ski-area microclimates, plus some honorable mentions, based on remarkable aspects of the snowfall characteristics compared to the surrounding area or region.

Colorado is not especially snowy, but Wolf Creek Pass is the exception to the rule.  At an altitude of 10,640 feet, the long-term observing site at Wolf Creek Pass has an average annual snowfall of 435 inches, highest in the state.  In addition, Wolf Creek Pass is well situated to be pounded in warm storms with southwesterly flow, resulting in snow with a higher average water content than found elsewhere in Colorado [10.3% (Judson and Doesken 2000)].

Not all microclimates are good for skiing.  The problem at Gore is that it is too far east to get much lake effect and a bit to far northwest to receive as much nor’easter snow as the mountains of New England.  C’est la vie.

Mt. Bohemia might be the most geographically isolated ski area in the contiguous United States.  It’s on the Keweenaw Peninsula, about as far north as you can get on the UP of Michigan and nearly surrounded by Lake Superior.

You want lake effect?  Mt. Bohemia is the place.  The resort claims an average snowfall of 273 inches and, although it’s difficult to confirm this given a paucity of long-range observing sites in the area, it’s clearly the snowiest ski area in the midwest.  And it’s bloody cold too.  Deep powder, certain frostbite, what are you waiting for?

7. Jay Peak, VT
In 2008, Trevor Alcott and I wrote a paper for the Bulletin of the American Meteorological Society entitledSecrets of the Greatest Snow on Earth (I ultimately used the article as a springboard for my book of the same title).  When in review, one of the anonymous reviewers took great offense that we did not include Jay Peak in the analysis.  Fair enough.  Jay does especially well in northwesterly flow thanks to the orientation of the mountains of northern Vermont and a lack of substantial upstream terrain.  There are other northern Vermont ski areas benefit from these characteristics, but perhaps not to the extent of Jay Peak.  Plus the Jay Peak powder cult has threatened me enough that I no longer question the power of the Jay Peak cloud.

Alyeska rises above the Turnagain Arm just east of Anchorage and has a base elevation of only 250 feet.  Due to the formidable nature of the Chugach Mountains and the maritime nature of the region, it probably has the largest snowfall gradient with altitude of any major resort in the United States, which results from both the increase in precipitation with altitude and the increase in the fraction of precipitation that falls as snow.  Resort statistics suggest a 208″ mean snowfall at the base and a 512″ mean snowfall at mid mountain (~1400 feet).  That staggering increase is characteristic of coastal Alaska, but where else do you find a major ski area cutting through it?

In my view, Snow Ridge has the best quality natural snowfall in the northeast United States.  The area reports a very believable average snowfall of 230 inches, most of which is lake effect generated by Lake Ontario.  Even my snow-snobby students enjoyed a powder day there when we were working on the Tug Hill Plateau a couple of years ago. 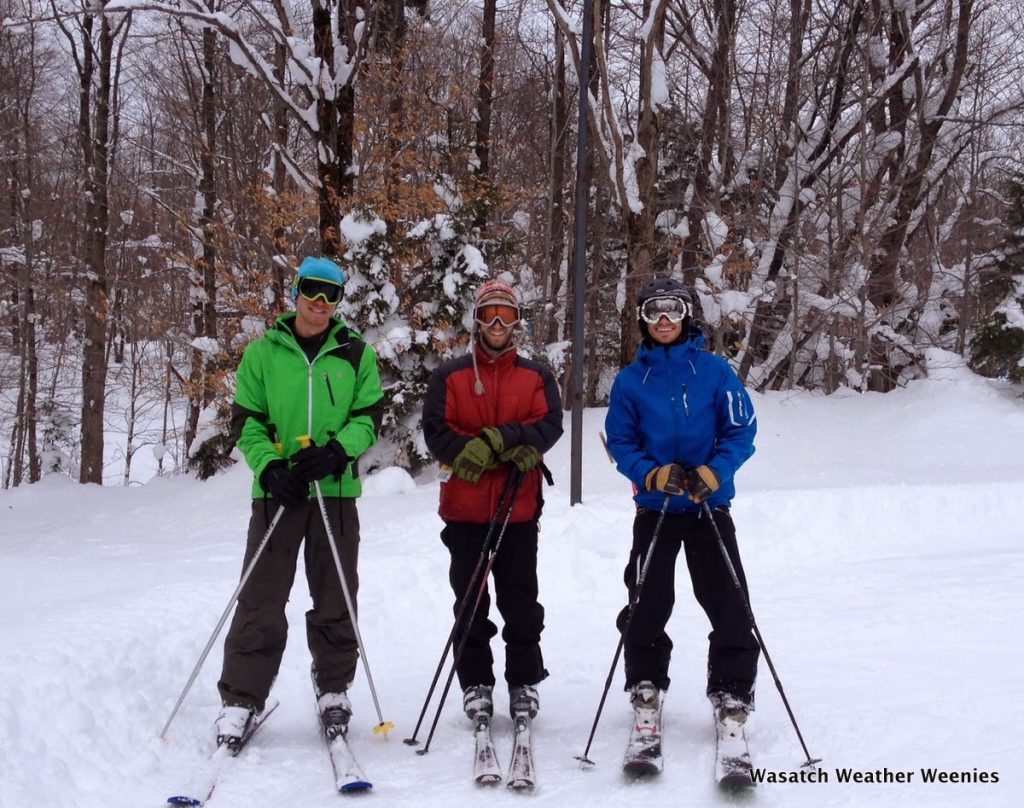 Meteorologists call the depletion of atmospheric water vapor by precipitation airmass transformation.  An interesting aspect of atmospheric water vapor is a very small fraction of it contains hydrogen isotopes that are relatively heavy (they have one proton and one neutron instead of just a proton).  Water vapor molecules that contain this heavier hydrogen isotope, known as deuterium, tend to condense more readily and rain out as an airmass pushes inland.  As a result, the snowpack in the eastern Sierra tends to be somewhat depleted of deuterium, except at one place.  Mammoth.

The map below is an oldie but a goodie and shows an analysis of deuterium in the Sierra snowpack.  Note the nose of higher values at Mammoth, illustrating that airmasses impinging on Mammoth Mountain have experienced less transformation and water vapor depletion that those that have traverse broader, higher topography to the north and south.

It’s a bit self-serving to put Alta/Snowbird at #3 on this list, but I’ve yet to find an area in the contiguous United States with a better combination of quality and quantity than the upper Cottonwoods, and Little Cottonwood gets the nod here because it is a bit snowier than Big Cottonwood.

All sorts of crazy ideas exist concerning why it snows so much in the upper Cottonwoods, but the most obvious is almost always overlooked.  The terrain around the Cottonwoods forms an island of high terrain that is exposed to flow from nearly every direction.  Alta and Snowbird are well known for snow in northwesterly flow, but they almost always get something even when the flow is from other directions.

This tremendous diversity of storms leads to the large annual snowfall totals and contrasts with other high areas of the Wasatch (e.g., Mt. Timpangos), which lie along linear ridges and have a narrower storm spectrum (e.g., predominantly southwesterly flow).

Snowiest ski area in the world.  World record 1,140 inches recorded in the 1998/99 season.  Admittedly, Mt. Baker ski area isn’t even the snowiest location in the region it sits in due to its low altitude, but an average snowfall of nearly 650 inches puts it at #2 on this list.

I’m guessing you didn’t see it coming, but Snoqualmie Pass has a truly unique and remarkable microclimate.

The problem in the Cascades isn’t moisture, it’s temperature.  West of Snoqualmie Pass and along much of the western slopes of the Cascades, skiing isn’t viable at 3000 feet elevation, the base elevation of the ski areas in Snoqualmie Pass.  If you drive to Snoqualmie Pass from Seattle, the snow line is often above 3000 feet, but turn the corner and enter the pass and you find a huge snowpack.

There’s one main reason for this: cold easterly flow.  For much of the winter, the Cascades separate relatively mild marine air to the west from colder continental air to the east.  This cold air frequently pushes into Snoqualmie Pass, resulting in locally lower snow levels than found to the west.

The climate in Snoqualmie Pass is very similar to that in Stampede Pass, which is just to the south and has had an official weather station for many years.  If you look at a wind rose for Stampede Pass in January, you see a predominance of easterly flow.

And this has a significant impact on temperature.  If you compare the mean temperature at Stampede Pass to Paradise ranger station on Mt. Rainier, it’s actually colder from December to February, despite the lower elevation.  This is because Stampede Pass (and Snoqualmie) are frequently under the influence of cold, easterly flow, whereas Paradise is west of the Cascade crest and cutoff from the cold easterlies.

If you could plug the low-elevation corridors that issue from eastern Washington to Stampede and Snoqualmie Pass, the snow climate would change dramatically, a much greater fraction of wintertime precipitation would fall as rain instead of snow, and one of the busiest ski areas in the United States would probably cease to exist or be barely viable.

Although the cold easterly flow is a remarkable refrigerator, it’s not going to be able to hold off the inevitable as the planet warms in the coming years.  The snow climate of Snoqualmie Pass is one of the most vulnerable to global warming because of its low elevation and frequent snowfalls at temperatures near (and above) 0ºC.

Add your $0.02 by commenting.  I’ve focussed on ski areas here for brevity, but feel free to think broadly (i.e., backcountry) and globally.