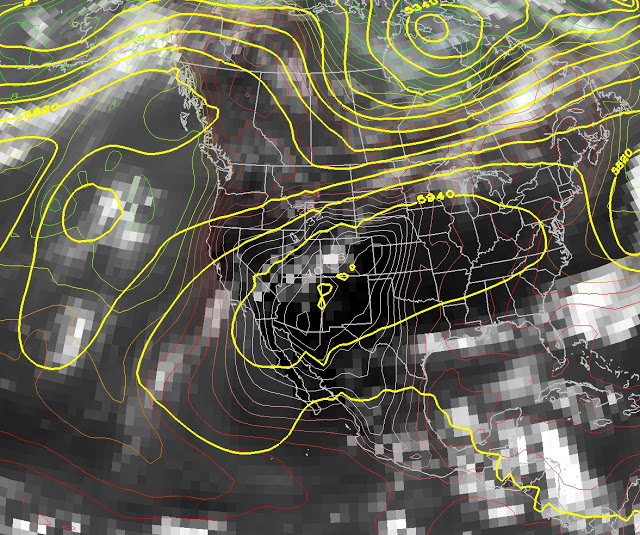 Jim Steenburgh of the UofU providing a look at the Heat Wave coming this weekend over the desert Southwest. Here in Star Valley it will be warm(not hot) and dry. Enjoy!

Over the next several days, portions of the southwest U.S. will experience a warming trend leading to fry-an-egg-on-the-sidewalk conditions as a high amplitude ridge sets up over the region.  The 500-mb heights look to be about as high as they get, exceeding 6000 meters (6 km) near the center of the ridge.  For example, in the GFS forecast for 0000 UTC 20 June (6 PM MDT Sunday), 500-mb heights exceed 6000 meters at a few locations in Arizona, New Mexico, and Colorado.  Temperatures at 925-mb, roughly 750 meters above sea level, exceed 40ºC (104ºF) across most of Arizona (Note: this level is below ground for high-elevation regions, but illustrates the extreme heat for lower elevation portions of the state).

The National Weather Service has issued an excessive heat watch for much of southern California and Arizona.

Excessive heat in that part of the world means an event fit for neither man nor snake.  I pulled up the National Weather Service grid-point forecast for the Phoenix airport and forecast maximum temperatures climb from 103ºF today to 119ºF on Sunday.  In the extended (not shown), forecast highs are 119ªF on Monday and 117ºF on Tuesday.  The all-time record high in Phoenix is 122ºF, set on June 26th, 1990.
This is still a relatively long lead time forecast, so there’s some uncertainty in just how high it will go, but an oppressively hot situation looks quite likely.  Right now, northern Utah looks to be on the periphery of the worst temperatures, meaning temperatures above average this weekend (high 80s at the Salt Lake airport), but not at record levels.  After that, we’ll have to see.