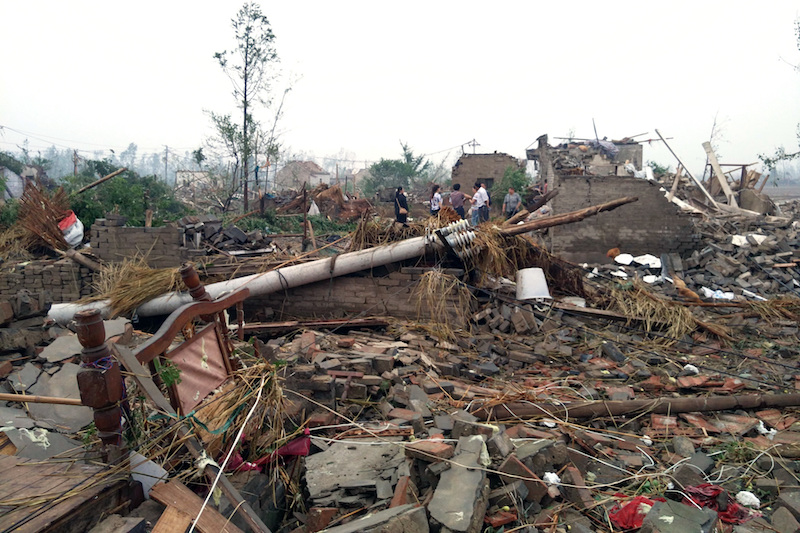 While much of the tornado attention typically focuses on the United States, other areas of the world can be  affected as well. Such was the case in the city of Yancheng China on June 23rd.

Following is a blog about the China tornado by Bob Henson

At Least 78 Deaths in China Tornado

By: Bob Henson , 4:29 PM GMT on June 23, 2016
A tornado struck the outskirts of the east-central Chinese city of Yancheng during a powerful thunderstorm on Thursday afternoon, killing at least 78 people and causing widespread destruction. Yancheng is an urban area of more than 8 million people with a city-center population of about 1.6 million, located in the coastal plain of China’s Jiangsu Province about 200 miles north of Shanghai. Chinese state media are reporting nearly 500 injuries, with 200 critical. The storm also produced hail and heavy rain.

Figure 2. A villager stands near houses destroyed in the aftermath of a tornado that hit Funing county in Yancheng city in eastern China’s Jiangsu Province on Thursday, June 23, 2016. Image credit: Color China Photo via AP.

Figure 3. Himiwari-8 satellite image from 0600Z on June 23, 2016 (2:00 am Thursday EDT, or 2:00 pm Thursday local time in Yancheng, China). A band of intense thunderstorms stretched more than 600 miles across central and northeastern China. The apparent tornado struck the Yancheng area around 2:30 pm local time Thursday. The coldest cloud tops associated with the Yancheng thunderstorm (blue and green colors] span about 250 to 300 miles (400-480 km]. Image credit: CSU/CIRA/RAMMB, courtesy Japanese Meteorological Agency.Another deadly result of the Mei-yu frontIntense storms are common along the Mei-yu (or baiu) front, which typically persists for a few weeks in late spring and early summer. This semi-permanent feature extends from eastern China across Taiwan into the Pacific south of Japan, associated with the southwest monsoon that pushes northward each spring and summer. The AMS Glossary notes: “The mei-yu/baiu front is very significant in the weather and climate of southeast Asia as it serves as the focus for persistent heavy convective rainfall associated with mesoscale convective complexes (MCCs) or mesoscale convective systems (MCSs) that propagate eastward.” A number of studies have found that the Mei-yu rainfall tends to be particularly heavy in the summer following an El Niño event.On June 1, 2015, China experienced its worst peacetime maritime disaster on record, as 442 people died when acruise ship capsized on the Yangtze River during an intense Mei-yu thunderstorm. Although a tornado struck about five miles away, an official report found that a strong microburst was most likely responsible for the capsizing. Similarly, it may take time to determine how much of the damage in Yancheng was related to tornadic activity as opposed to any downbursts that may have occurred. As shown in the map below, eastern China is one of the more tornado-prone parts of Eurasia.

Figure 4. The relative likelihood that the atmosphere would support tornado production within grid boxes of 2° latitude and longitude, as estimated from model-generated atmospheric profiles. The scale is logarithmic; a value of -2.0 (orange) corresponds to 15 six-hour periods per year that are tornado-favorable, and the likelihood increases or decreases by a factor of 10 for every change of 1.0 on the axis at bottom. Image credit: Courtesy Harold Brooks, NOAA National Severe Storms Laboratory. An earlier version of this graphic appears in Brooks et al., “The spatial distribution of severe thunderstorm and tornado environments from global reanalysis data,” Atmospheric Research 67-68 (2003