While December thus far across Western Wyoming and Star Valley has been relatively  mild with considerably less snow than a year ago, that is expected to change by Christmas.  A major change in the large scale wind pattern is forecast to occur later this week and continuing through Christmas.  This can best be illustrated with an animation of the 500mb(18,000 ft) forecast flow pattern from today through Christmas morning.

A  very large upper level high pressure is forecast to form over Alaska and the Gulf of Alaska, effectively diverting much of the stormy weather up over the High and then dropping down through Canada into the northern U.S. bringing with it an outbreak of Arctic air.  This can best be depicted by the forecast departure from normal, the temperatures  across the United States on Christmas morning. 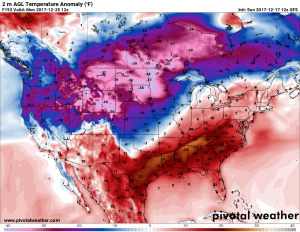 Much of Wyoming is forecast to be 30 or more degrees below normal on Christmas morning.  That would put night time temperatures well below zero all areas with single digits at best during the day.

There is a strong upper trough that will be passing across Star Valley and surrounding areas around mid week, and this should add to the rather meager snow cover now in the valleys.  It does not appear to be a big event, but likely more productive than the one that just exited the area.  Some early indications are that several inches will fall in the lower elevations and higher amounts in the mountains.  Most likely timing is for later Wednesday and Thursday. 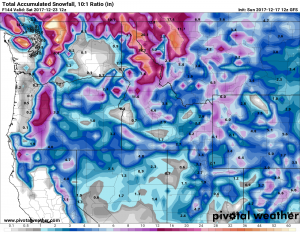 The 6-10 day temperature forecast centered around Christmas clearing shows the cold outbreak expected through the central part of the United States and abnormally warm in Alaska under the influence of the upper high.