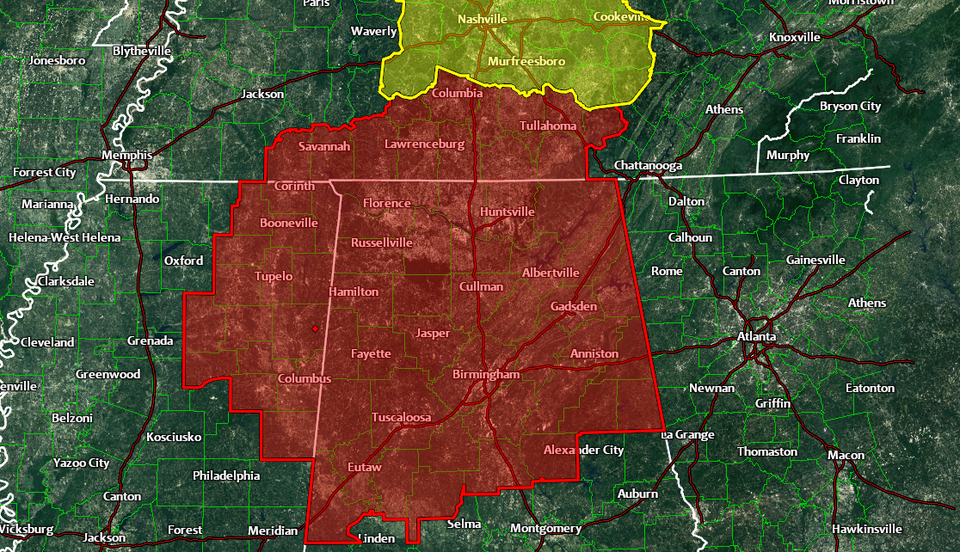 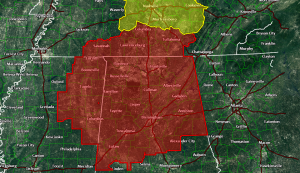 The Storm Prediction Center issued a “PDS Tornado Watch” for parts of the southeast on Monday evening ahead of thunderstorms that could produce strong and long-lived tornadoes. Most of us are accustomed to tornado watches and tornado warnings, but the enhanced wording of this watch—Particularly Dangerous Situation—conveys the urgency of the hazards facing Alabama, Tennessee, and Georgia this evening.

This evening could see some ugly storms form across the mid-south. The atmosphere is primed to produce storms that could generate significant tornadoes, hail larger than golf balls, and damaging wind gusts. The threat is so great that the forecasters at the Storm Prediction Center opted to add the enhanced “particularly dangerous situation” warning to really drive home the point.

One of the most confusing things to remember about the weather is the difference between a “watch” and a “warning.” A watch is issued when hazardous weather is expected to develop over the next couple of hours. Watches are usually in effect for six to eight hours. A warning is issued when hazardous weather is occurring or expected to develop imminently. A tornado warning, for instance, is issued when weather radar detects strong rotation in a thunderstorm or debris lofted into the air, or when spotters on the ground report a tornado or a funnel cloud.

Watches are common. PDS watches are rare. The expert forecasters in charge of issuing these watches don’t have a set criteria to add this kind of wording to a tornado watch or severe thunderstorm watch. The issuance of one of these watches “is subjective with no hard criteria,” according to the Storm Prediction Center. Unfortunately, these forecasts don’t bust very often. When there’s a PDS watch, you know that someone somewhere is about to see some of the most dangerous weather nature can produce.

A PDS Tornado Watch is issued when multiple strong, long-track tornadoes are expected to develop in or around the watch area. Some of the worst tornadoes in American history developed within watches with this enhanced wording attached to them. The environment in and around these watches is explosive—there’s so much instability and wind shear in the atmosphere that any thunderstorm that develops can begin rotating and turn into a supercell. The rotating updraft in a supercell thunderstorm makes it resilient and allows it to produce strong tornadoes, hail larger than golf balls, and destructive wind gusts.

A PDS Severe Thunderstorm Watch is relatively rare, but they do happen every couple of years. A regular severe thunderstorm watch means that thunderstorms in and around the watch area could produce hail larger than quarters and damaging wind gusts in excess of 60 MPH. The enhanced wording is added when an exceptionally destructive wind event—such as a derecho—or widespread destructive hail event is expected to unfold.

Local National Weather Service offices recently started issuing this kind of enhanced wording to tornado warnings, as well. The most common enhanced wording added to a tornado warning is a “tornado emergency,” which is issued when spotters confirm a large, destructive tornado heading toward a population center. The first tornado emergency was issued in the warning that covered the F5 tornado that tore through the Oklahoma City area on May 3, 1999.

If you’re in the path of today’s severe weather, keep in mind that the best place to seek shelter from a tornado is the lowest level of a building in an interior room. If you’re in a vehicle, take shelter in the nearest sturdy building. It’s not a good idea to take shelter under a bridge. Despite some videos of very lucky individuals over the years, bridges offer no real protection from tornadic winds or the debris carried in them. Parking under a bridge to protect your vehicle from hail can cause a traffic jam that could trap dozens of motorists in harm’s way—large hail often precedes a tornado in supercell thunderstorms