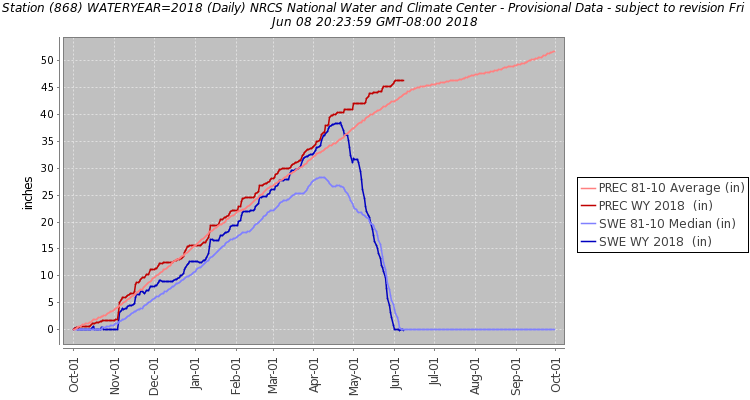 After a warmer than normal May the substantial winter snow cover in the Western Wyoming mountains is rapidly coming to an end.  The current high runoff in the rivers will follow suite shortly as they drop the remainder of June.  Here is a last look at some of the local SNOTEL sites 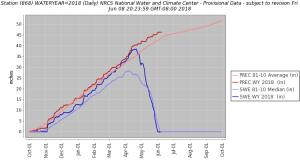 Willow Creek SNOTEL ended up with an above normal snowpack, peaking about the middle of April near 38 inches of water content, 10 inches above normal.  It rapidly melted in May and was totally gone by June 1st. 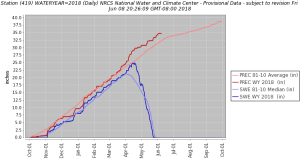 Cottonwood Creek SNOTEL at a little lower elevation peaked in mid April at 25 inches of water content,  5 inches above normal.  It had completely melted off by the last week in May. 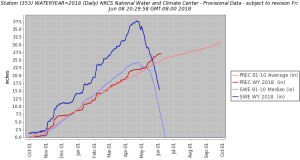 The Blind Bull SNOTEL in the northern Wyoming range peaked at almost 38 inches, 10 inches above normal and still was measuring a water content of 15 inches as of June 7th.  That will melt away quickly in the coming week..

The Palisades Reservoir which filled by July 1st in 2017, will most certainly fill even sooner this year. 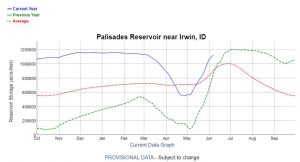 While last year remained  nearly full  until late this winter when room had to be made for the ongoing runoff, it still was at levels well above normal even then.  Now it looks like it will be at 100 percent capacity before the end of June.

The same holds for Jackson Lake where current storage is around 95 percent.