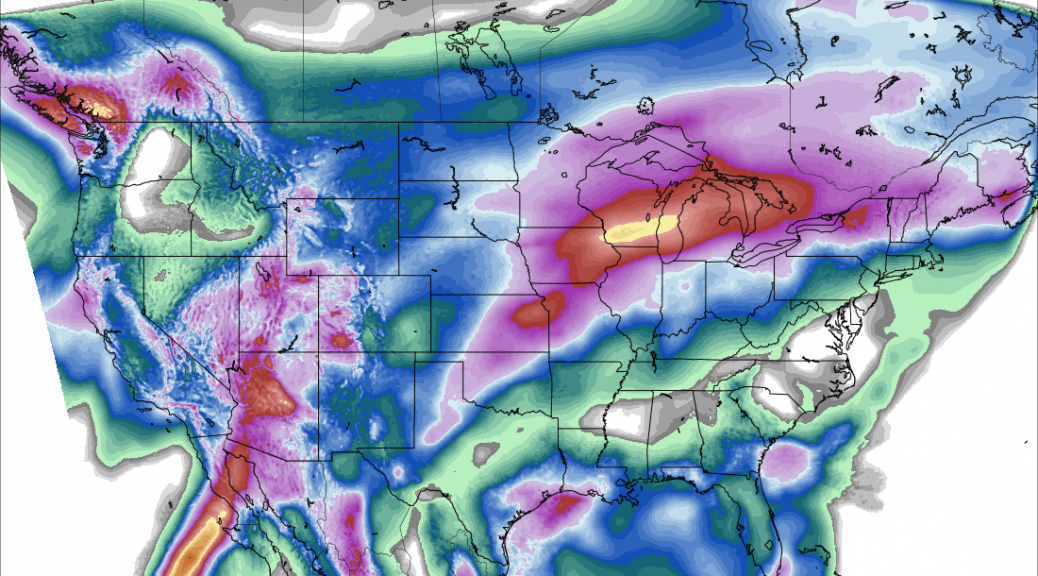 With the arrival of October a major shift in the weather pattern will take place over the Western United States and that includes Star Valley and Western Wyoming. The 3 months of exceptionally dry and warm weather will be replaced by a more typical fall pattern as a series of  wet and steadily cooler systems move through the area.

The large scale flow for this weekend shows low pressure along the Oregon coast with a very large high over Alaska.  Additionally Hurricane Rosa west of  Baja California  is heading north.

By Monday afternoon the remnants of Hurricane Rosa will be spreading tropical moisture and precipitation northward into the southwest deserts while a strong upper trough develops just off the California coast.

By next weekend a deep trough of low pressure will be centered over the western states.

The results of these dramatic changes will initially bring moisture from the remnants of Hurricane Rosa northward through Utah into Western Wyoming.  Precipitation will likely  increase by Tuesday across our area.  Then as the major trough shifts inland later in the week, showers will continue to occur with the snow level lowering in the mountains toward the weekend.

Following is a forecast of total precipitation  for the coming week. The area of very heavy precipitation associated with the remnants of Hurricane Rosa spread northward through Arizona into Utah and to a lessor extent western Wyoming. Forecast amounts upwards to 2 inches in Southwest Arizona would be more than half what would be expected in an entire year!

The longer range temperature forecast which includes next weekend is calling for dramatically cooler  weather and support the snow levels lowering in the mountains.

With  considerably higher chances of precipitation for the same period over much of the mountain west.

There  is some uncertainty as to the details  how much precipitation  will occur and what areas will receive the greatest benefit.  However confidence in the change of pattern is high, bringing an end to the extended dry weather of the past summer.