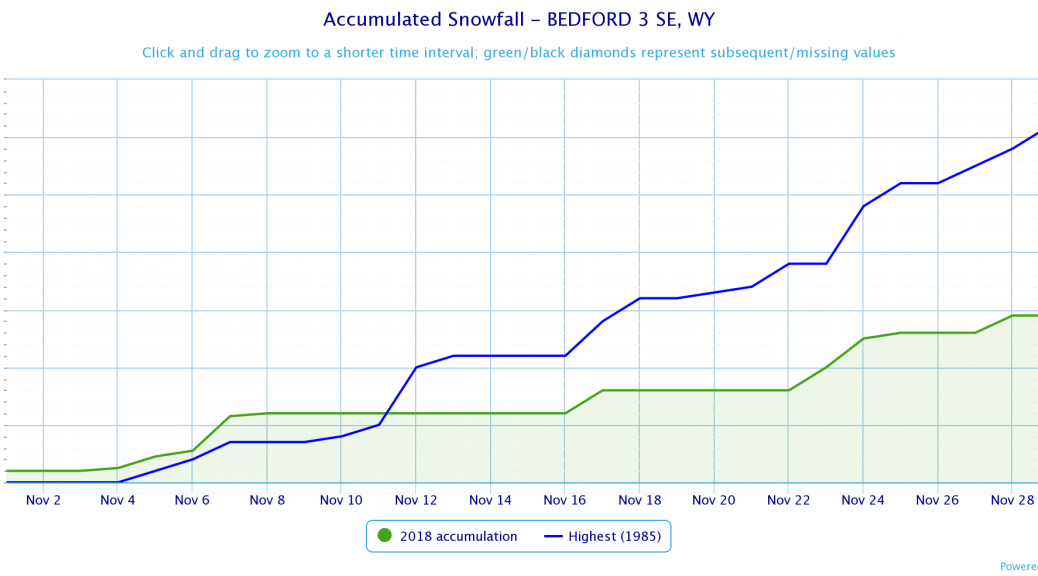 After a dry summer, November provided Star Valley much needed precipitation with a substantial snow pack developing over the mountains by months end. Temperatures headed down as is typical for November with winter like levels by the end of the month.

Following is the daily maximum and minimum temperatures for Afton with comparison to both  normal and record readings.

Afton snowfall  totaled about a foot for the month. The snowiest November on record was 1985.

Taking a look at the Bedford 3SE November 2018 record  also shows temperatures near or below normal on most days.

Considerably more precipitation  occurred in the Lower Valley reflected by the over 3 inches measured at Bedford 3SE, well above normal.

Snowfall also was substantially above the Afton station, but far below the snowiest on record in November 1985.

The coldest morning was the 26th when the Double L Ranch dipped to 6 below and Thayne Elementary 2 below.  The same morning at the  Star Valley Ranch Heights station at 6650 feet it only dropped to  just 11 above.

Looking at other precipitation totals:

Elsewhere around the state of Wyoming temperatures averaged below normal with minor exceptions, particularly in the southwest  corner.

Precipitation was overall above average in Lincoln County, while other regions had pockets of wetter and drier than normal.