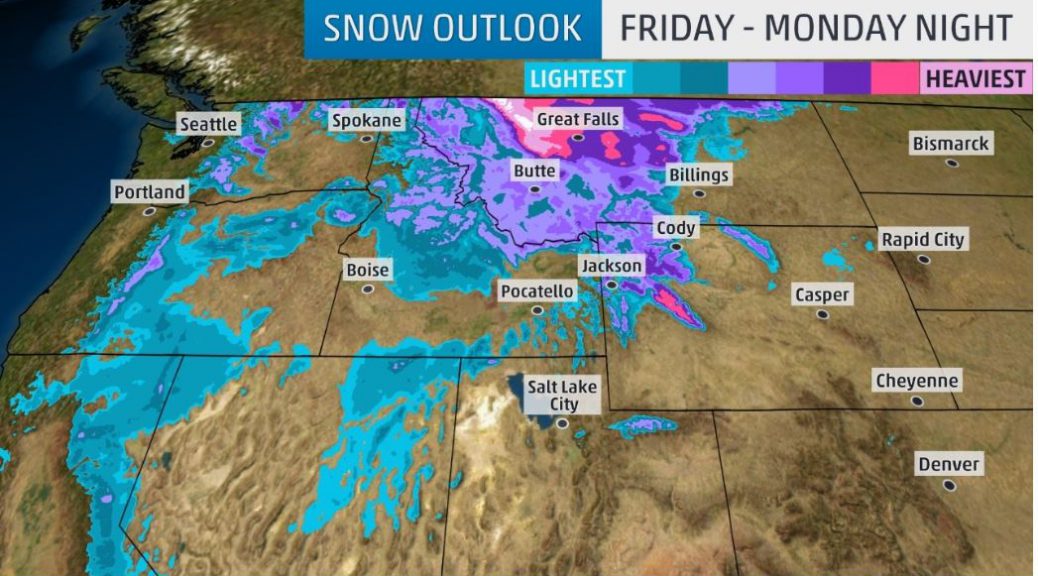 This latest story from the Weather Company highlights potential for a major snow in Montana, with lessor amounts into Wyoming including Star Valley

Weekend Blizzard May Be a September Benchmark Snowstorm in Montana, Dumping Over a Foot of Snow

A late September blizzard is increasingly possible this weekend in parts of the northern Rockies, and some lower elevations of Montana, Wyoming and the western Dakotas could see their first snow of the season just days after the official arrival of fall.

Snow will become more widespread later Friday and continue through the weekend in the northern Rockies of Idaho, Montana and Wyoming.

A second round of snow may blanket the northern Rockies and parts of the northern High Plains from Monday into Tuesday or even next Wednesday.

The National Weather Service has issued a winter storm watch for parts of northwestern and north-central Montana from Friday evening through Sunday afternoon.

The strong wording in this watch from the NWS office in Great Falls, Montana, Wednesday morning was eye-opening.

Some lower elevations could also see significant accumulations of wet snow, particularly on grassy areas in the northern High Plains of eastern Montana, northeastern Wyoming and perhaps the western Dakotas early next week.

The combination of heavy, wet snow and strong winds this weekend may lead to widespread tree damage, power outages and blizzard conditions in parts of Montana, according to the NWS.

Travel in parts of central and western Montana, possibly into northwestern Wyoming, is likely to become dangerous, if not impossible, especially over mountain passes and in open areas where blizzard conditions could quickly reduce visibility.

High temperatures are likely to be 10 to 35 degrees below late September averages this weekend from Northern California and northern Nevada to Montana, Idaho and Wyoming. Daytime temperatures holding in the 30s, 40s or 50s could set daily record-cold highs Saturday through Tuesday in parts of the northern Great Basin and northern Rockies.