Star Valley and surrounding areas experienced the coldest October on record in 2019.

Here are some of the notable marks set:

Here are the daily graphs of the record cold in October for both Afton and Bedford 3 SE stations:

To illustrate just how unusually cold this past month was, the notoriously cold station of Peter Sinks in the mountains west of Bear Lake hit a bone chilling -45 below on the morning of the 30th – the lowest ever recorded in the lower 48 states for the month of October. 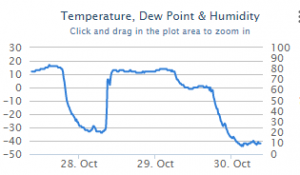 Peter Sinks Utah temperature graph October 28-30th 2019.  The average temperatures were below to much below normal much of the surrounding area.

Not surprisingly, snowfall was above normal for the month ranging upwards from 10 inches at Afton to 14 inches at Star Valley Ranch, and the top was 18 inches at the Smoot 5 SSE station.

The nearby mountains had a particularly snowy October.  The SNOTEL site at Willow Creek measured almost 5 inches of precipitation,  which was mostly in the form of snow. The current snow depth at Willow Creek is around a foo,t with considerably more likely at higher elevations above 9000 feet.