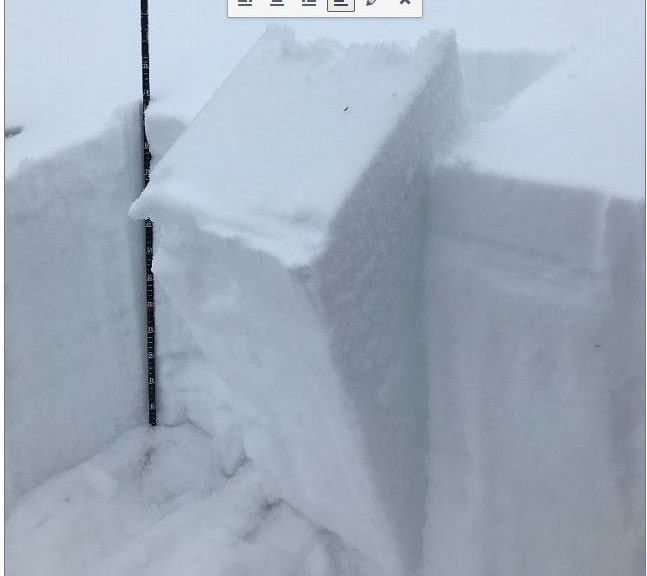 The Bridger-Teton Avalanche Center provides a weekly summary of snow and snow conditions through the winter.  The most recent was for the period of Nov 15-21.
Nov 15 to Nov 21
Two cold fronts bring several inches of new snow to the mountains
The dry conditions that have prevailed over the region since the beginning of November were interrupted by a fast-moving disturbance that passed through the region in the morning on November 16 and another cold front that moved south from Montana through Central Wyoming into Colorado on November 20. Both systems brought 1 to 3 inches of snow to the higher elevations. Snowfall totals for this week were 5 to 6 inches on Togwotee Pass, 3 to 5 inches in the Teton Range and 3 inches in the Wyoming Range. Figure 8.1 Infrared satellite image provided by the National Weather Service on November 18. In this image a low-pressure system and associated cold front are poised to move into Western Wyoming.

Our early season snowpack is generally one to two feet deep at the higher elevations. Slopes are mostly bare below an elevation of 7,500 feet and on steep south facing slopes up to an elevation of 10,000 feet. Snow surfaces are wind-blown in open terrain. Dry soft snow surfaces can be found in shaded, sheltered areas. The snowpack structure is comprised of a mix of crusts and faceted snow. In sheltered areas where the snow is deepest, crusts are deteriorating and the snowpack is primarily comprised of unconsolidated faceted snow crystals. Thermal crusts play a more prominent role in the snow structure on sunlit aspects and in areas where the snowpack is shallower. Figure 8.2 Photograph provided by Jen Reddy of a snow pit profile on a west aspect of Angle Mountain at an elevation of 9,680 feet on November 17. At this location a few inches of new snow lie upon layers of faceted snow and faceted crust. Figure 8.3 Photograph also provided by Jen Reddy of a snow pit profile on a northeast aspect of Angle Mountain at an elevation of 10,180 feet on November 17. At this location the snowpack was primarily comprised of faceted snow. A shovel shear test failed on faceted snow at the base of the snowpack. Figure 8.4 Snow pit profile conducted on an east aspect of Breccia Peak at an elevation of 10,300 feet on November 20. At this location the snow was two feet deep. Several inches of recent new snow sat atop a snowpack that was comprised of faceted snow crystals. Figure 8.6 Map that displays the moisture content of the snowpack at Snotel sites in the Western United States on November 21 compared to the 30-year average. Most of the sites in Western Wyoming were near or below average. Figure 8.8 Photograph taken on November 19 of Mt. Hunt, the Grand Teton and south facing aspects in the southern portion of the Teton Range.