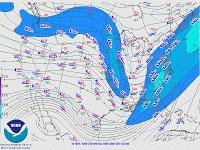 A dramatic change in the jet stream and storm track took place this past week across much of the United States.  Storms which were moving from well north of Star Valley then southeastward into the Central U.S. are currently moving across the desert southwest with only limited effects this far north.

It has been a seasonably cold and winter like weekend across the Valley with snow amounts ranging generally from 3-5 inches with the greatest two day total of 6 inches at Star Valley Ranch.

The pattern for this coming week will favor dry and generally fair weather as high pressure develops eastward across the western states.  Again the jet stream will shift southward toward the weekend and bring the primary storminess to California and the desert southwest.

Cloudiness over the weekend should be diminishing Monday, leading to at least some sunshine by afternoon.  More sunshine is likely from Tuesday into Thursday as high pressure dominates the intermountain region.  However with little wind at least until toward the weekend, nighttime temperatures will be quite cold, particularly with the limited cloud cover.  Some of the colder valley locations will likely drop to the high single digits, possibly as early as Tuesday morning. The low sun angle and snow cover will limit the amount of daytime heating with afternoons remaining near freezing at least through Wednesday.  As a result it could be even colder Wednesday morning with near zero possible in coldest spots.

Later in the week warmer air will begin to spread across the area leading to afternoon highs possibly into the 40s.  Snow chances appear limited until the weekend when the storm off California begins to move eastward into the desert southwest. Again as occurred this weekend, it appears that the greater impact should remain well south of Star Valley.