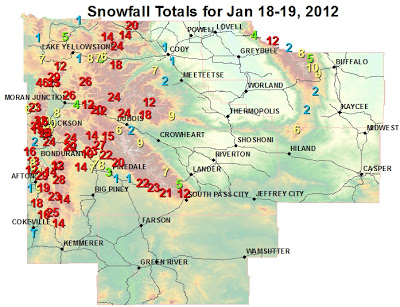 As expected  Big Snows have occurred across Star Valley and much of Northwestern Wyoming and more is on the way.  As of Thursday afternoon upwards of 3-4 feet have fallen in the Tetons with 2 plus feet in the Salt and Wyoming Ranges as well as in the valley around Jackson Hole and Hoback Junction. Lower portions of the Salt River Valley reported at least a foot with a little less further south in the Afton area.  Below is a detailed map of snowfall amounts received thus far.

Temperatures warmed considerably to above freezing in much of Star Valley Thursday.  Snow has temporarily mixed with or turned to rain.  However more significant snow is expected tonight and early Friday ahead of the next disturbance moving rapidly east across the area.

Snow has already increased by this evening across the valley enhanced by the strong westerly winds of 50-60 mph that forecasts show at 700 mb or mountain top level.

This will maintain snows with additional 6 or more inches of wet snow in the valley tonight with upwards of  a foot in the nearby mountains.

As temporary high pressure ridging moves across on Friday snow should diminish possibly briefly ending as the westerly winds at mountain top level weaken to only 20 mph or so.

The next system will again spread snow, likely heavy at times across Western Wyoming Saturday.

The models over the next 3 days are forecasting large amounts of precipitation again with between 1 and 2 inches of water content.

With snow ratios of 10 to 1 this suggest that at least a foot is likely in the valleys upwards to  2-3 feet in the Tetons.

With the very fast jet stream now in place across the area, more storms are likely to affect Star Valley next week, but timing and intensity is difficult to anticipate at this time.