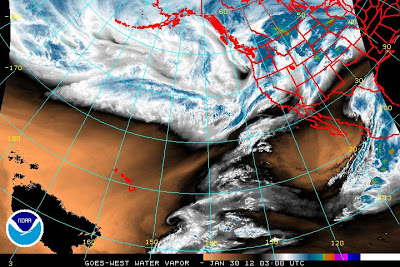 Once again as has happened a couple times already this winter, it appears that Star Valley will experience a prolonged period of snow free days in early February.  For the beginning of the coming work week, a series of relatively weak disturbances will bring periods of mostly light snow to the area.  The Water Vapor imagery Sunday evening shows the first system now moving onshore in the Pacific Northwest followed closely by a 2nd  and even 3rd system.

The first system should spread snow across much of Star Valley beginning by early Monday afternoon.  Amounts should be greatest in the surrounding mountains with a couple inches possible in the Valley by evening.

The next weaker disturbance will likely continue a threat of at least some light snow going into Tuesday with a possible overnight break between systems.

The major change in the pattern will begin by mid week as an upper ridge of high pressure builds strongly into the Western States and then dominates our region at least through the coming weekend. As seen in the model forecast for this coming Wednesday evening one last upper level low pressure wave will be moving toward Star Valley as the strong upper ridge builds toward the West Coast.

The threat of light snow will persist across Star Valley until this final upper trough moves southeast of our area by Thursday morning.  Total snowfall for the period Monday afternoon until Wednesday night could add up to 2-4 inches in the Valley with upwards of a foot in favorable nearby mountain locations.

With this type of pattern the sensible weather in Star Valley will be dominated by strong nighttime inversions which will have a difficult time dissipating in the afternoon as the sun angle is still too low.  Result will be minimums on the valley floor dropping to near or below zero with afternoon highs in the probably not rising to freezing.  This will result in rather marked differences with those areas that remain above the inversion, such as the mountainous regions and higher valley locations such as Star Valley Ranch and the far end of the Valley south of Smoot where elevations are near 7000 feet.  Here daytime maximums should be well above freezing and remain above zero at night.

The higher sun angle the first week in February compared to the extended stagnation period experienced in December should be a little more effective in daytime warming keeping temperatures above the cold ones in December.
﻿﻿