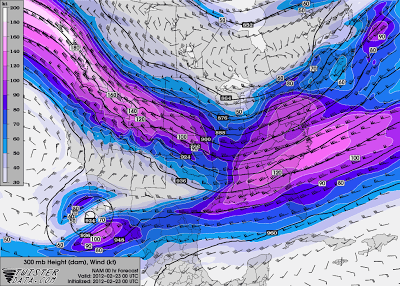 Star Valley has avoided the impact of the Polar Jet and it’s associated storm track much of the winter.  Such was not the case the past couple of days as was well forecast by the computer models. An intense band of jet stream winds raced southeastward across our area Wednesday.  The 300 mb analysis (around 30,000 feet MSL) from Wednesday evening shows the core of the 140-160 kt jet aimed right for western Wyoming 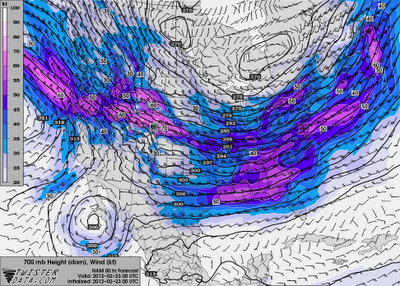 Around mountain top level at 700mb Wednesday evening winds were running from 60-70 kt.

Combined with warm air that spread eastward, conditions were favorable for strong mixing of the jet stream winds to the ground level at most locations.  The higher elevations, particularly mountain ridges and passes were most affected.  Few observations are available at these remote locations with a couple notable exceptions.  The automated site atop Mt. Coffin on the southern end of the Wyoming Range at almost 11,000 feet hit a peak gust of 140 mph at 8:30 pm.  The observations at the top of the Ski Lift above Teton Village at 10,300 feet had a peak gust of 76 mph around 4pm and 77 mph at 9:45 pm..

Exceptionally strong winds affected much of Star Valley Wednesday afternoon and evening.  Some of the notable gusts and time of occurrence were:

Preceding the strong winds and warmer air, snow fell across all of Star Valley much of Tuesday before changing to rain Tuesday night.  Snow reports ranged upwards from just a few inches in the Afton and Smoot area to an observed 15 inches just to the southeast of Thayne.  Star Valley Ranch measured an even foot bringing the current snow depth to 40 inches. A reliable observer just northeast of Etna had almost 8 inches before the rain made it a sloopy mess.

Colder air will arrive later tonight dropping temperatures well below freezing by morning where they will remain through the coming weekend.. This will lead to very icy conditions Thursday morning in areas where the melting that occurred on Wednesday, refreezes.