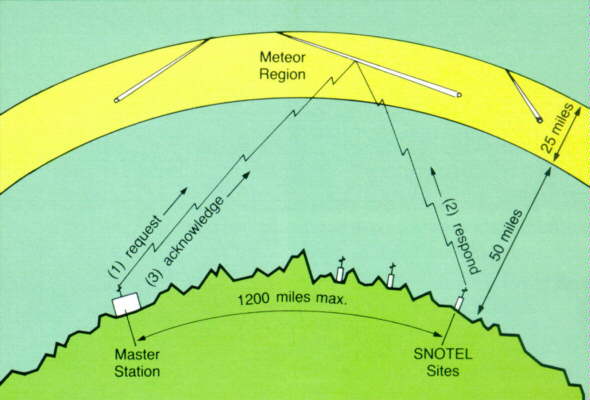 The word snow is a frequent topic of conversation in Star Valley.  There is either too much, too little, it is around too long or it is too deep.  Without it Star Valley would not be one of the most beautiful valleys in this great country.  Snow is typically covering the ground  for nearly half of the year in many parts of the valley.  During the winter of 2010-2011 there was at least an inch on the ground at the Smoot  CoCoRaHS site from November 9th until  May 28th, or about 200 days.  This was over half a year!  This winter there was an even earlier start to the snow season with the continuous snow cover beginning on November 5th, 2011.  We can hope that Spring will come a little earlier this year!

The measurement of the amount of snow on the ground and its water content is critical to anticipating how much runoff from the spring melt will occur.  Thus the SNOTEL program is a major player in this.

SNOTEL is an acronym for Snowpack Telemetry.  It is  an automated system of snowpack and related climate sensors operated by the Natural Resources Conservation Service(NCRS) of the United States Department of Agriculture in the Western United States and has been around since the mid 1970’s.

There are over 600 SNOTEL sites in 13 states, including Alaska. The sites are generally located in remote high-mountain watersheds where access is often difficult or restricted.

SNOTEL uses meteor burst communications technology to collect and communicate data in near-real-time. VHF radio signals are reflected at a steep angle off the ever present band of ionized meteor trails existing from about 50 to 75 miles above the earth. Satellites are not involved; the NRCS operates and controls the entire system.

Sites are designed to operate unattended and without maintenance for a year. They are battery powered with solar cell recharge. The condition of each site is monitored daily when it reports on 8 operational functions. Serious problems or deteriorating performance trigger a response from the NRCS electronics technicians located in six data collection offices.

The SNOTEL sites are polled by 2 master stations operated by NRCS in Boise, Idaho and Ogden , Utah. A central computer at the NRCS’s  National Water and Climate Center (NWCC) in Portland, Oregon controls system operations and receives the data collected by the SNOTEL network.

There are two SNOTEL sites in the Salt Range providing information for snowmelt runoff into the Salt River.  They are :

There is an excellent web page that will enable any user to quickly ascertain the current snow season at
each SNOTEL site compared with the normal and the greatest and least over the life of the site, which in
most cases is over 30 years.
http://www.nwrfc.noaa.gov/snow/
Just tag each site with your cursor and it will display the stations current  data.

In addition on the home page of starvalleyweather.com  is a link to the Willow Creek SNOTEL site
displaying  temperatures, snow depth, snow water content  along with accumulated precipitation for the water year,
which begins Oct. 1.