The second week in May will see Star Valley warming to above normal daytime temperatures with 60s and possibly low 70s under mostly sunny skies. There were even warmer periods in April when near record temperatures occurred.

Given the unusually warm start to Spring the question is when  would be the favorable time to plant seeds for the summer gardens.  It is instructive to first look at the table  below that shows the soil temperatures(about 4 inches deep) when germination is most likely. 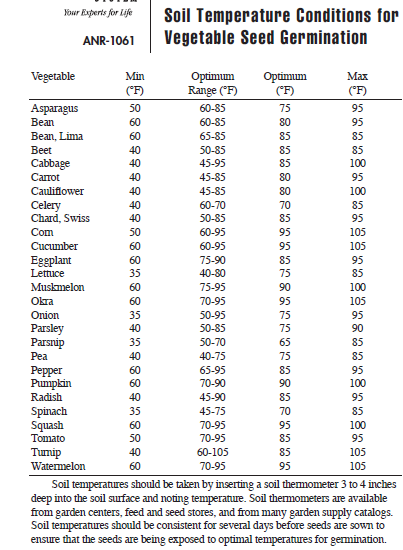 With the Thayne Elementary weather station having three soil temperature sensors( near the surface, 2 feet and 4 feet), it is interesting to compare how the soil is warming up at different levels coupled with the air temperature.

This first graph shows the 2 foot deep sensor over the last 6 plus months.

The temperature held around freezing from the first of January until the end of March when the snow cover melted.

For the past month even though April experienced unusually warm conditions, the soil temperature warmed only gradually.

Referring to the above table for seed germination, even though it was a warm April, only a very few seeds would germinate at 40F. The study was done for a 4 inch level, however both the 2 and 4 foot level temperatures were similar

Thus at a 4 inch depth per the table the Thayne temperature at 4 inches is likely slightly warmer than the 2 and 4 foot levels.

There are several vegetable seeds that are not adaptable to the not only short growing season in Star Valley but also as can be seen from the observed 2 foot sensor temperatures from late last summer, which did not exceed 60F,  remains too cool.