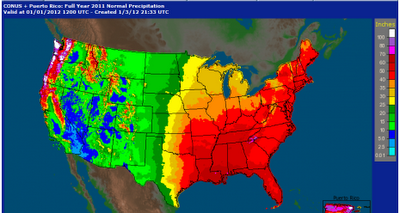 Since the most recent Snowfall season has about ended(as anyone who lives in Wyoming knows the only months you can count on it not snowing are July and August) it is of interest to look at some of the excellent precipitation graphics that are available through the National Weather Service.

For an overview the first image is one of the normal annual precipitation that occurs over the 48 states.

Once east of the Rockies the amount of precipitation that falls generally increases the further east and south toward the Gulf of Mexico and Atlantic Ocean. Over the Western states, it is quickly obvious the major role that the mountains play.  The greatest amounts fall generally over and west of the Cascades and Sierras Nevada Mountains.  In some place over 100 inches of precipitation is the normal amount!

Zooming in on the State of Wyoming and examining the precipitation distribution  it is easily seen the tremendous role the terrain plays. 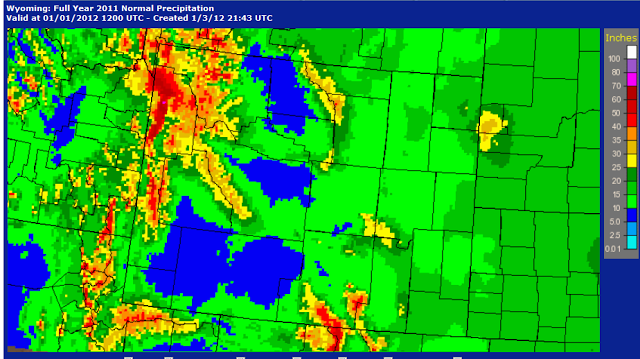 The major mountain ranges of western Wyoming coincides with the greatest precipitation amounts. The Tetons normally experience upwards to 70 inches with the Salt Range40- 50 inches.  Amounts in Star Valley are around 20 inches.

The east side of the Western Wyoming mountain ranges generally receive less than 10 inches in a typical year. 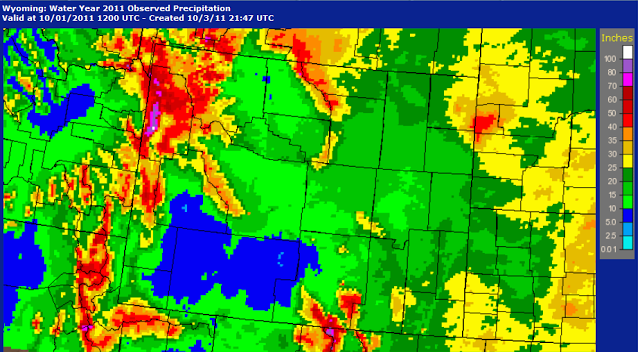 Amounts ranged upwards to near 100 inches in the Tetons with much of Star Valley in excess of 25 inches.  All of western Wyoming was well above normal, except for the normally dry east side of the mountains where generally as little as 5 inches fell.

While the current water year has another 4 months to go, it can be seen that it has been  a much drier period. 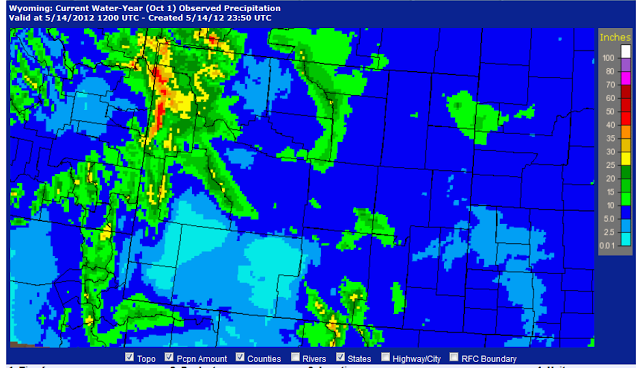 It has been particularly dry on the east side of the mountains with only a couple inches having fallen since October 2011.  Typically the summer months do not provide much useful precipitation for purposes of water supply, so it is fortunate that most of the states reservoirs are still flush with the previous winters bountiful runoff.