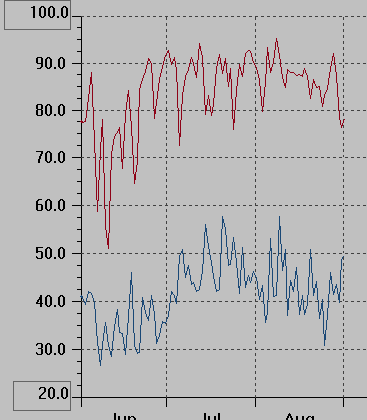 In Star Valley, Labor Day typically brings an end to summer even though officially it becomes Fall on September 22st, the Autumnal Equinox. This is a good time to review the three summer months.  Warm and dry certainly were the descriptive terms for the Summer of 2012.

On an average June/July and August, around 4.5 inches of rain can be expected as recorded by the Bedford Climatological station.  This year the Bedford observer could only measure  .87 or about 20 percent of a normal amount.  Here are other July/July August Totals from around Star Valley.

Regarding temperatures it has been warm days and cool nights with only a couple brief interruptions by a cooler air mass.  The warmest day of the summer was at all stations recorded the afternoon of August 8th.   The hot spot was the 98 observed at Alpine followed closely by 97 at Etna ES.  Even the usually coolest location of Star Valley Ranch reached a 94 on the 8th of August. Bedford came in with the coolest maximum of 90.

The first couple of weeks of June experienced the coolest weather, with all stations reporting their lowest  of the 3 summer months on the 7th of June. 27 degrees was the lowest reported at 3 location, Thayne and Etna ES along with 2 NE Etna.

The following figure illustrates what makes for such a pleasant summer climate in Star Valley vs most other places in the U.S.  While most every day experienced warm afternoon, the mornings were pleasantly cool.