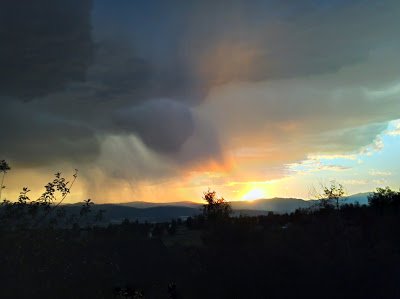 Sunday evening September 2, 2012 a high based thunderstorm crossed Star Valley between 7:30  and 8pm.  It primarily affected the Thayne/Etna area eastward across Bedford andStar Valley Ranch.  I was  able to take a series of photos from Star Valley Ranch capturing a classic downburst signature.  While much of the rain evaporated as it fell through rather dry air before striking the ground, strong winds were recorded at each of the lower valley Davis Weather Stations.

The strongest gust was recorded at the Star Valley Ranch station where 48 mph was measured shortly after 8pm.

Following is a sequence of 5 photos taken at approximately one minute intervals looking west from Star Valley Ranch.

It appears there were a series of downbursts with the storm with at least two captured in the photos.  The 7:48 and 7:49 images show one such downburst with the following 3 images catching a larger one.

The next figure is a schematic cross section of a downburst

And here is an excellent example of a downburst cloud with a similar bulbous cloud formation as in the Star Valley event.  This series of photos was taken in the Fall of 1991 in Oklahoma.

This is typical of downburst producing  storms as they appear rather weak on radar, in comparison to a more traditional severe thunderstorm.

The Star Valley Ranch weather station has a dramatic display of not only the 48 mph wind gust, but the very sharp pressure jump and temperature  drop as the storm passed.( about 40 minutes need to be added to this graphic as the internal weather station clock was found to be in error.)