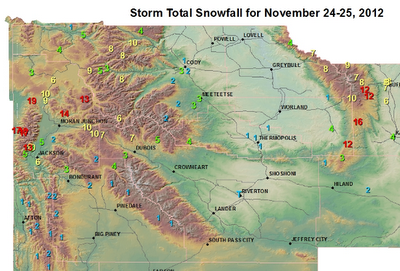 Over the Thanksgiving weekend the storm that crossed Wyoming resulted in some snow in Star Valley and more in the higher elevations.  However there was a swath of around a foot of new snow that tracked across the Tetons and the Absaroka Ranges with upward to a foot and a half in parts of the Tetons.

So far High pressure has dominated through Tuesday of this week and one more day of dry and relatively mild weather is on tap for Wednesday.  As can be seen on this Tuesday evenings satellite photos, the Northeastern Pacific Ocean is dominated by very active storms.

The following series of 500mb forecast charts over the next 6 days shows the progression of the deep trough now off the west coast.

The sequence is every two days showing the steady progression of the large trough to a position east of Wyoming over the central states by Monday evening.

This pattern supports an extended period of precipitation across western Wyoming including Star Valley.  It should begin by later Thursday/Thursday night and continue through the weekend.  The snow level will fluctuate through Saturday with rain and snow in  Star Valley and potentially heavy amounts of snow in the higher mountains. By Sunday it should be all snow in the valley as the cold trough moves inland.  The following graphic shows the model forecast total precipitation from Wednesday through Monday.  While amounts range upward to 1-2 inches in the higher mountains of Northwest Wyoming, note the very large totals in parts of Northern California.

Between 10-15 inches of rain are indicated which if verifying could result in a serious flood threat.

Eureka  CA WFO has addressed this threat with the following graphic. 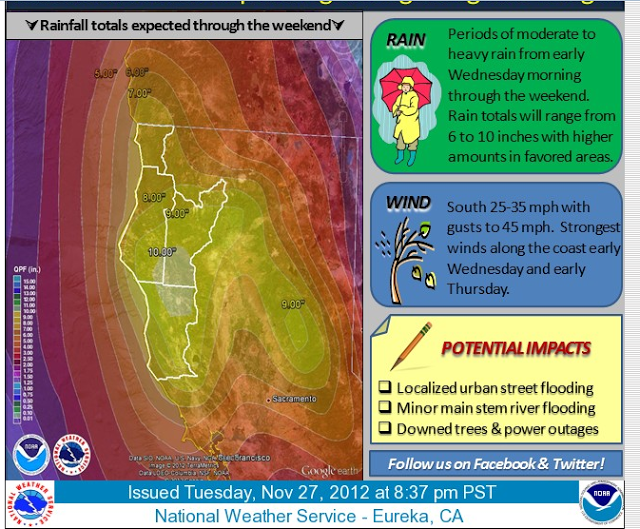