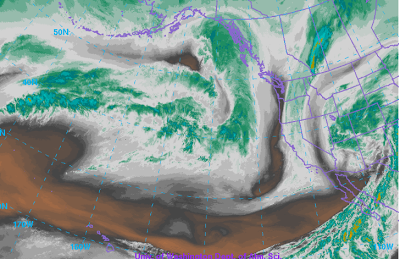 A strong winter storm is passing to the south of Star Valley this Friday morning, bringing the first significant snow of the season to the mountains of Arizona and Southern California as far south as the Mexico border. The only effects here in Western Wyoming from the system will be clouds and some light snow.

Following is a sequence of 500 mb charts for the next 4 days, beginning Friday morning.  Initially the system in Arizona quickly moves northeastward across the center of the U.S. followed by successive disturbances embedded in an increasingly strong westerly flow pointed at western Wyoming.

As can be noted on this series of 500 mb charts, the upper winds initially out of the south over Star Valley with the system over Arizona, become strong westerly by Sunday and remain such well into the coming week.

Westerly winds are the favorable direction to bring precipitation to the Star Valley region, given the lifting effect of the north-south mountain ranges of the area.  The forecast precipitation for this time period indicates substantial total to over an inch in the mountains of western Wyoming and possibly in the Star Valley area as well.

While this is just a forecast, the pattern is becoming favorable for significant snow accumulations in the mountains, such as the the Salt, Wyoming and Teton Ranges.  Unlike storms earlier in December the precipitation in Star Valley is expected to be all snow, and accumulations beginning Sunday into the middle of the next week could be substantial.