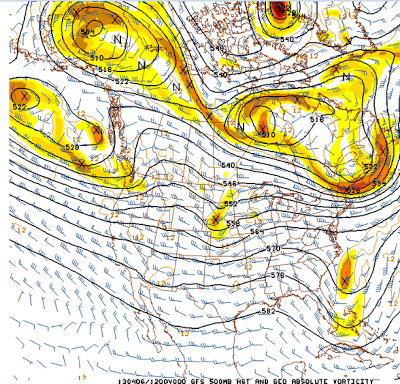 A major pattern change will take place over the weekend, leading to snow over much of the Cowboy State by Monday night.  Here in Star Valley one disturbance brought some wet snow this Saturday morning.  After a temporary break more rain and snow will develop across the valley by this evening, continuing periodically through Monday.

Illustrating the big changes expected is a series of 500mb charts , beginning with the initial conditions this Saturday morning and every 24 hours thereafter through Tuesday morning.

Both the Water Vapor and Infrared satellite images from this Saturday morning show the systems that the model brings into the Western States.

Both images show the impulse that brought the morning precipitation over Star Valley moving onto the east with the next/stronger system moving eastward into western Idaho.  Over the Gulf of Alaska can be seen the complex circulation systems that will result in the deep, cold trough in the western States by Monday.

Considerable forecast uncertainty remains due to the complex and rapid pattern change.  There is the potential for significant snowfall on the order of more than a foot in the higher elevations of Western Wyoming Mountains.  In Star Valley, there will be snow at times mixed with rain. Total precipitation in the valley could range upward from half an inch by Monday.  It will be cold enough by Sunday night for all snow.  Amounts upwards to 6 inches will be possible by Monday night in the higher levels of Star Valley, generally above about 6300 feet.

The model forecasts precipitation over much of Wyoming through Monday evening.

As the trough deepens over the Rockies on Monday, moisture will spread into eastern Wyoming from the Gulf Of Mexico, leading to the potential for a major snow storm in that part of the State