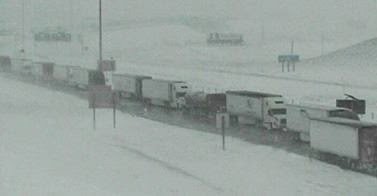 A strong spring storm system brought significant snowfall to southeast Fremont, eastern Sweetwater, southern Casper and Casper Mountain.  Along with the snowfall strong north to northeast winds caused considerable blowing and drifting of snowfall especially above 7000 feet.  Accumulating snowfall varied considerably across Casper with around one inch across northwest and northern Casper to between 4 and 7 inches at the base of Casper Mountain in the Outer Drive area.  Casper Mountain was the big winner for snowfall with around 2 feet of snow with the east side of the Wind River Mountains coming in a close 2nd with 1 to 2 feet.  This snow and wind caused several major highways to be closed for 12 to 24 hours including much of Interstate 80.