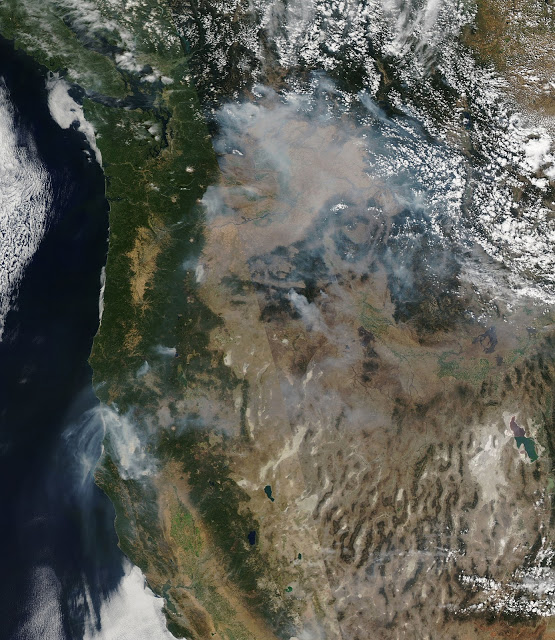 Thanks to Jim Steenburgh of the U of U, his blog provides a summary of the fire season.  We are very fortunate in Western Wyoming to have had a relatively wet summer.  However the smokey skies locally are evidence of the dire conditions to our west.

By Jim S
Generally clear skies over the northwest U.S. enabled an excellent perspective on the smoke from the MODIS sensor on NASA’s Aqua satellite.  It seems pretty smoky here, but it barely shows up in this image.  Conditions are far worse to our west and northwest.

Some of the fires have devastated communities.  Here are a couple of photos of damage near Lake Chelan, WA from KING TV.  The bottom one is from Lake Chelan State Park.

The National Interagency Fire Center currently rates the national firefighting preparedness level at a V, the highest possible, which indicates that major incidents have the potential to exhaust all agency resources.  Yesterday the center called in 200 active military troops to help with wildfire fighting efforts across the west.  This is the first time they have done so since 2006, although 200 seems like a small number and I wonder if more will be called soon.

Here are some remarkable numbers for active incident firefighting efforts in the various geographic areas.  Resources are heavily concentrated in the northwest (NWCC) and northern California (ONCC).

And some numbers for the year to date on the number of fires and acres burned, which have now eclipsed 40,000 and 7 million acres, respectively.  5 million of these acres are in Alaska.

Utah has avoided major problems so far.  Let’s hope it stays that way and that things improve elsewhere.