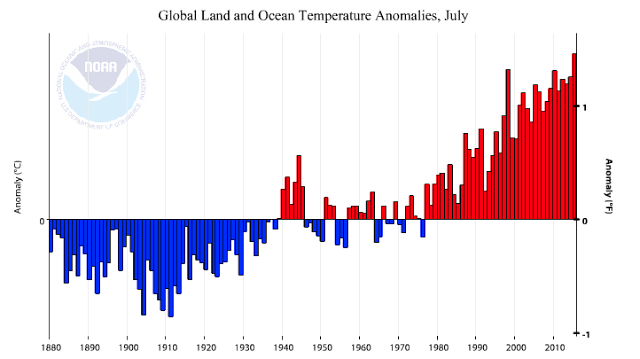 Another blog provided by Jim Steenburgh of the U of U.

By Jim S
No surprises here.  The National Centers for Environmental Information issued their monthly summary for July and the globally averaged temperature was the highest for any month since the start of records in 1880.  Their full report is available here.

Meteorologists typically present temperature trends in terms of anomalies (i.e., a departure from some long-term average).  For July, the globally averaged temperature anomaly was 0.81ºC (1.46ºF), the highest on record.  In 2nd place is 1998, also a strong El Nino year.

Since July is also the warmest month of the year globally (this reflects the greater fraction of land in the Northern Hemisphere), this July was also the warmest in the entire 1627 month record going back to 1880.  Yup, Earth has a fever and the only prescription is more cowbell.

Or, more accurately, the only prescription is less carbon. It is the combination of long-term global warming with the strong El Nino that is leading to these unprecedented numbers.
Like politics, all weather is local and the good news for Utah is despite remarkable high globally average temperatures, Mother Nature was good to us and we actually came out below the 20th century average and enjoyed the coolest July since 1997.

Our good fortune is clearly evident in the analysis below which shows departures from average temperature for the month.  We’re in the blue, indicating below average, but red, indicating above average predominates.  Note that these anomalies are with respect to 1981–2010.  Comparison with the 20th century average would produce a plot shifted even more into the red since the 20th century average temperatures are lower than those of the last 30 years.

The likelihood that 2015 will be the hottest year on record continues to increase.