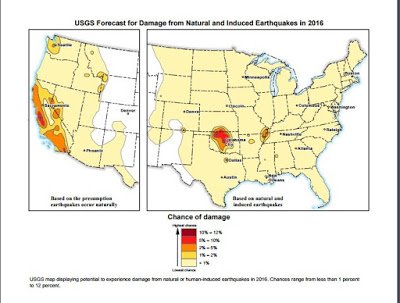 The U.S. Geological Survey (USGS) has produced a 1-year seismic hazard forecast for 2016 for the Central and Eastern United States (CEUS) that includes contributions from both induced and natural earthquakes. The model assumes that earthquake rates calculated from several different time windows will remain relatively stationary and can be used to forecast earthquake hazard and damage intensity for the year 2016. This assessment is the first step in developing an operational earthquake forecast for the CEUS, and the analysis could be revised with updated seismicity and model parameters. Consensus input models consider alternative earthquake catalog durations, smoothing parameters, maximum magnitudes, and ground motion estimates, and represent uncertainties in earthquake occurrence and diversity of opinion in the science community.
Ground shaking seismic hazard for 1-percent probability of exceedance in 1 year reaches 0.6 g (as a fraction of standard gravity [g]) in northern Oklahoma and southern Kansas, and about 0.2 g in the Raton Basin of Colorado and New Mexico, in central Arkansas, and in north-central Texas near Dallas. Near some areas of active induced earthquakes, hazard is higher than in the 2014 USGS National Seismic Hazard Model (NHSM) by more than a factor of 3; the 2014 NHSM did not consider induced earthquakes. In some areas, previously observed induced earthquakes have stopped, so the seismic hazard reverts back to the 2014 NSHM. Increased seismic activity, whether defined as induced or natural, produces high hazard. Conversion of ground shaking to seismic intensity indicates that some places in Oklahoma, Kansas, Colorado, New Mexico, Texas, and Arkansas may experience damage if the induced seismicity continues unabated. The chance of having Modified Mercalli Intensity (MMI) VI or greater (damaging earthquake shaking) is 5–12 percent per year in north-central Oklahoma and southern Kansas, similar to the chance of damage caused by natural earthquakes at sites in parts of California.