Under clear skies and with fresh snow cover, temperatures dropped to some of the lowest levels so far this season.  Single digits were common across Star Valley with the lowest observed occurring a Double L Ranch where it dipped to Zero followed close behind at Smoot with a 1 above.  Coldest observed in the area was in Grey’s River at the Box Y Ranch with 5 below.

Here is a map of the low temperatures across the region 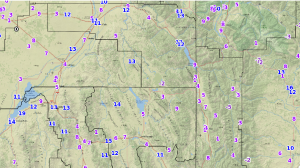 However the notoriously cold spot in the region was actually not quite as cold as it was Wednesday morning.  That would be  at Peters Sinks in Northern Utah located on the road to Logan from Bear Lake.  While it still dropped to a frigid -14 this morning, it was 20 degrees higher than Wednesday when it dipped to -34!

Following is a temperature graph of the station the past two days. 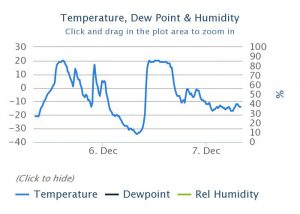 Peter Sinks is an uninhabited sink hole just off the Logan Pass highway at over 8400 feet.

Following is a link to a study of the Peter Sinks historically cold spot.