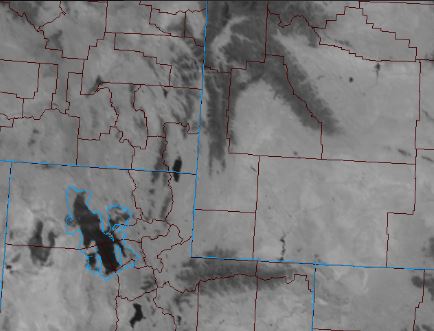 The new GOES-16 Satellite has several different bands that enable it to detect many different views of the earth.  One particular one that highlights snow and ice is the 1.6 micron band(snow/ice band)

The Snow/Ice band is primarily used for daytime snow, ice, and cloud discrimination. At 1.6 μm, it takes advantage of the relatively large difference between the refraction components of water and ice. During nighttime hours, it has a bonus application of detecting fires which can radiate relatively brightly at 1.6 μm against the dark background.

This band proved quite useful in illustrating the sharp contrast from north to south across the Central Rockies from a look this Wednesday morning. The dark areas reflect current snow cover with the very dark objects water bodies.

This can be compared with the visible image about the same time where the white does reflect the current snow cover.

The above graphs display current  snow water equivalent and compares it with both the averages and record high years.  Levels are well above normal in northern Lincoln County as noted at Phillips Bench and Willow Creek and then drop to well below normal levels in southern Lincoln County and Kelley Ranger Station.