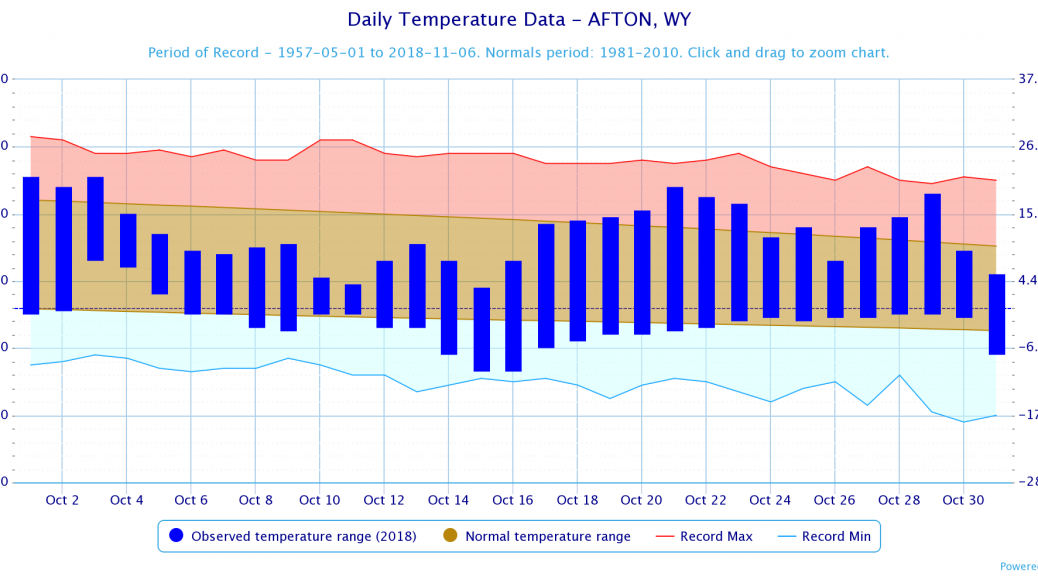 After a  very dry summer across Star Valley and surrounding areas,  October precipitation provided relief and brought an end to the fire weather season. There are two locations in Star Valley that have long term observational records. They are located in Afton and just southeast of Bedford.

The following graphs  are from these two stations showing data from October 2018.

Afton temperatures were above normal at the beginning and the later half of the month with a very cool period mid month. The warmest temperature was 71 on both the 1st and 3rd.  Near record cold occurred on the 15th and 16th when minimums were 13 above.

Afton measured a near normal amount of precipitation for October 2018

Most precipitation occurred on the 3rd and 4th.  No measurable snow fell.

Looking at where the precipitation at Afton stands for the year 2018, it is about normal.

As is typical Bedford 3SE was a little wetter than Afton with a total of 2.38. No measurable snow was measured.

Precipitation while near normal in northern Lincoln becomes progressively drier to to the south in 2018.

Star Valley Ranch thus far in 2018 has measured nearly 20 inches, while somewhat greater than Bedford 3 SE, is likely  a little above normal.

The coldest report for the month was at Double L Ranch with 9 above on the 15th.

The only snowfall reported in the valley was at Smoot 5 SSE with 1 inch on the 10th. The station is at an elevation of 7000 feet.