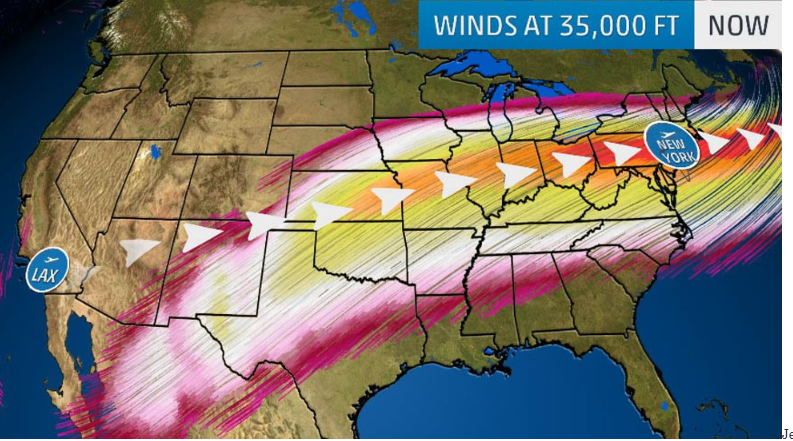 Jet Stream Winds from Southwest to Northeast U.S. Among the Highest on Record

Winds at jet-stream level, about 35,000 feet above the Earth’s surface in winter, have been among the highest on record from the Southwest late last week to the Northeast early this week.

A weather balloon launched by the National Weather Service office east of New York City in Upton, New York, at 7 p.m. EST Monday night measured 231-mph winds at the 250-millibar pressure level in the atmosphere, or about 35,000 feet above the surface. That is the strongest wind on record at this altitude for the New York City area.

Since most planes fly at jet-stream level (hence the term), the 200-plus-mph tailwind shaved time off some west-to-east flights across the United States. 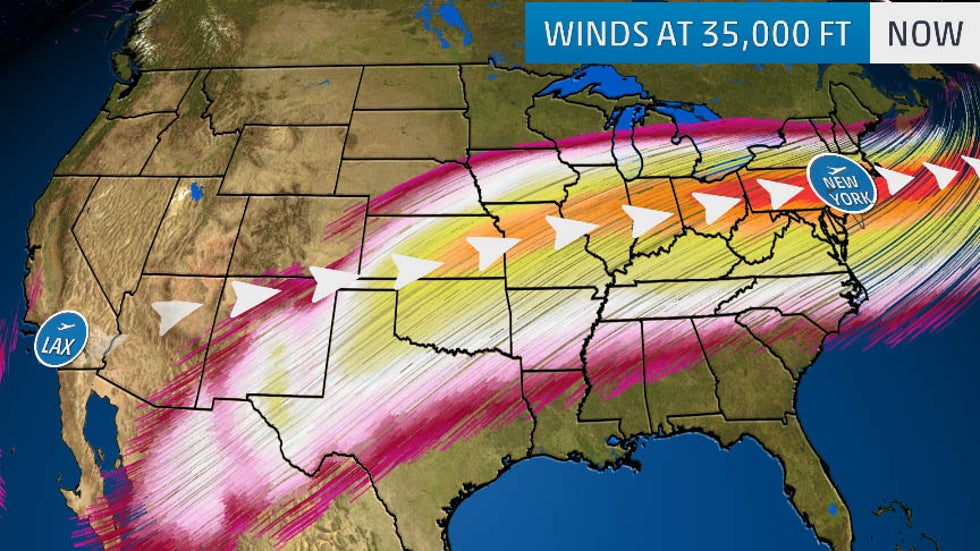 Jet-stream winds are contoured in various colors. The general flight path from Los Angeles to New York City is denoted by the white arrows.

A Virgin Atlantic flight from Los Angeles to London Monday night flew into a zone of maximum winds, known as a jet streak, embedded within the main jet stream located over central Pennsylvania.

That jet, a Boeing 787-9 Dreamliner, cruised at speeds as high as 801 mph over central Pennsylvania, according to live flight-tracking website FlightAware.com.

“[N]ever ever seen this kind of tailwind in my life as a commercial pilot,” tweeted Peter James, a New England-based jet captain with 25 years of experience, according to his Twitter profile.

The 801-mph ground speed might be a record for the Boeing 787-9 Dreamliner, which, in the past, has reached speeds as high as 776 mph, as pointed out by the Washington Post.

For reference, the average speed of this type of aircraft at cruising altitude (around 30,000 to 35,000 feet) is 561 mph, according to TopSpeed.com.

Since the plane was moving 240 mph faster than its typical cruising speed, albeit only for a brief time while in the jet streak, it reached London far earlier than scheduled. It landed 48 minutes early in the capital city of England.

Despite the aircraft traveling at 801 mph, those speeds did not break the sound barrier (767 mph). That’s because the speed relative to the air is closer to 600 mph since the air moving along with the jet stream was in the same direction as the plane (west-to-east).

(MORE: Why You Should Always Choose the Window Seat)

The New York City area wasn’t the only location that set records for the highest wind speed at the 250-millibar pressure level in the atmosphere.

A new wind speed record for the 250-millibar pressure level was set Sunday morning in Amarillo, Texas, at 199 mph.

All of these records date back to when weather balloons were first launched on a regular basis in the 1940s and 1950s. The records extend up to 2014, the last time the database was updated. In most locations, these records include more than 40,000 balloon launches over the years.

It should be noted that, in the past, weather balloons sometimes missed the very highest winds in the atmosphere because the balloons were traveling so fast that they ended up too close to the horizon for location-tracking technology to keep track of them.

Newer technology, such as GPS, has enabled better tracking of weather balloons at the jet-stream level since the late 2000s, so an event like this might not have been fully observed before about 15 years ago.

“With the old radio direction finding system, wind observations for a flight such as this would have terminated at around 20,000 feet, owing to ‘limiting angles’ of the tracking system,” Bill Blackmore of NOAA said in an email to weather.com. “Now, with the Radiosonde Replacement System GPS radiosondes (weather balloons), a complete and accurate wind profile can be measured for the entire sounding.”

Blackmore recalled a Feb. 3, 2007, event in which the 7 a.m. EST weather balloon launched from Sterling, Virginia, measured a wind speed of 258 mph at about 34,000 feet. That’s even higher than any of the wind speeds measured over these last few days.

“This event seems to be a combination of an exceptionally strong jet stream and an improved observing system that captured it better than we might have in the past,” said Bob Henson, meteorologist and climate blogger at Weather Underground.