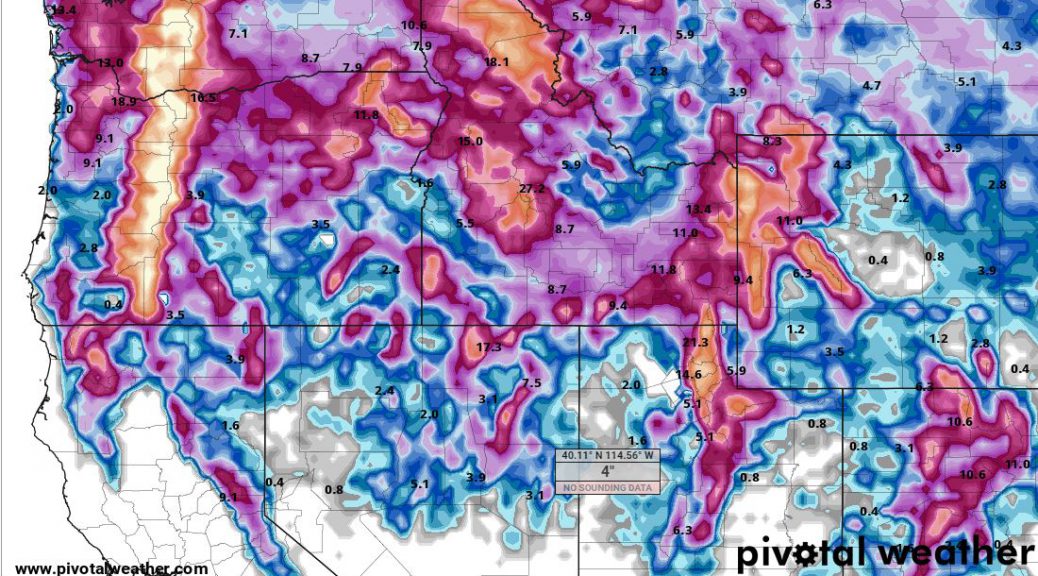 The first week of 2020 has seen a couple of significant snow events across Star Valley and surrounding areas.  In Star Valley total snowfall from New Years Day until  Monday January 6th ranged from a foot to around two and a half feet.  Star Valley Ranch  accumulated  30 inches  with Thayne  20 inches and Smoot around 17 inches. Unofficial measurements in Alpine have also been  above 2 feet.

These amounts would be about normal for the entire month of January, however there is a very active storm track/jet stream that will be affecting Star Valley over the next couple of weeks.  After a brief respite in snowfall, Tuesday, the next storm will spread snow across the area again on Wednesday.

The following is a series of 500 mb forecast maps for the next week illustrating the active jet stream that will be with us.

It is suggesting that by the middle of next week, snowfall amounts ranging upward from one to two feet in the Star and Jackson Valleys to three to four feet in the mountains.

The longer range forecast from the National Climate Center  which covers all of next week through January  19 2020 is colder and snowier than normal across much of the area surrounding Star Valley.

With such a fast start to the snow amounts for this January, and the favorable storm track across Wyoming the next couple weeks, total monthly snow could be substantial.  The record for January snowfall at the Bedford 3SE station is 70 inches that occurred in 1996. The greatest monthly snowfall for the station was December 1977 with 76 inches for the month.