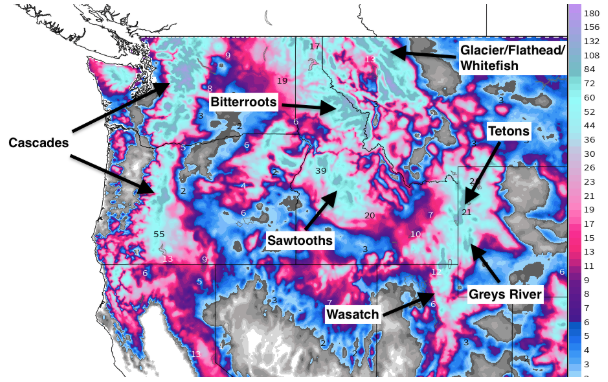 Following is the blog by Jackson Hole Meteorologist Alan Smith

The weather pattern has settled down a bit over the past several days, but that doesn’t change the fact that January 2020 has been one to remember.  There are still 11 days left in the month, but already this has been one of the snowiest January’s on record in the Tetons.

The remainder of the month does not look as snowy compared to the first half of the month, but we will still see enough snow opportunities that we could challenge some January records at Jackson Hole Ski Area before the month comes to a close.

Let’s take a look at some of the impressive stats from this month.  Jackson Hole Ski Area has two areas on its upper mountain where snowfall is measured daily, the Rendezvous Bowl Plot (elevation 9,580 feet) and the Raymer Plot (elevation 9,360 feet).

Jackson Hole Ski Area’s all-time January snowfall records are very much in reach as well.  Through January 20th, the Rendezvous Bowl Plot has recorded 129 inches of snow this month.  The all-time record for January at this station is 150 inches (set in 1997), so we only need 22 more inches to break this record.

The Raymer Plot has recorded 127 inches of snow so far this month, but the January record for this location is 181 inches (also set in 1997), which will be a bit more difficult to break.

The town of Jackson has recorded 32.2 inches of snow so far this January, which is well above the monthly average of 18.5 inches.  However, the all-time January record for the town of Jackson is 56 inches, so it is very unlikely that this record will be challenged.

Here is a regional look at snowfall totals reported so far this month.  It’s a little difficult to make out some of the higher totals in specific mountain ranges, but in general, January has been a very snowy month across the Pacific Northwest and Northern Rockies, and across the Wasatch in Utah as well.  Skiing conditions have been exceptional for much of Western North American over the past few weeks.

For the upcoming week, a series of weaker storms will bring additional snow to the Tetons.  The first of these storms will bring a prolonged period of light to moderate snow on Tuesday and Wednesday, and to a lesser extent Thursday, with 3-day snow totals likely ranging from 6-14″ in the Tetons.

Another series of weaker storms are then likely from Friday through Sunday of the upcoming weekend with more snow possible each day.  None of the storm systems this week look particularly impressive, but snowfall totals should add up nicely in the mountains over the course of the week, and there’s always a chance one of these storms turns into a surprise.

After a cold start on Monday, temperatures are going to be warmer for the rest of the week, and above seasonal averages for late January.  As a result, the snow that falls during some of these storms will contain higher moisture content compared to recent weeks, though it shouldn’t reach “Sierra cement” levels either.