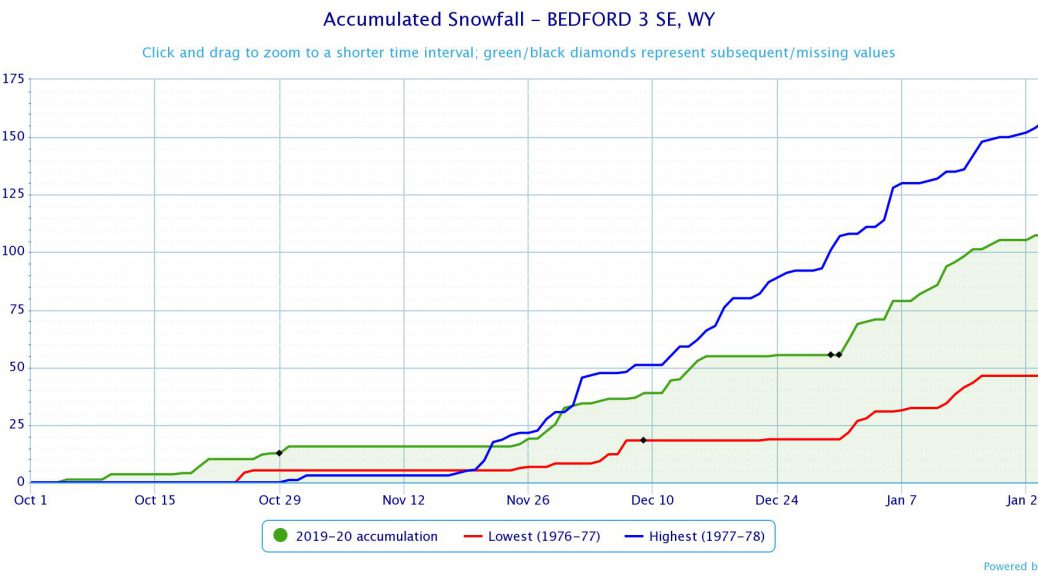 Typically the third week of January is the coldest of the winter in most areas including Star Valley. This winter some of our coldest weather actually  occurred last Fall!  The exceptionally cold outbreak that occurred the end of October amazingly resulted in temperatures almost as cold as any experienced so far this winter  To illustrate how the winter is going an examination of the data at the  climate station located 3 miles southeast of Bedford follows.

The actual coldest reading thus far this winter was -12F on December 18th.  So far this January the low has been -8F on January 11th.  Compare those winter time lows with the -11F on October 31 and -10F on October 30. These temperatures occurred a month and a half before the official start of winter!

Temperatures much of January have been running near to above normal.

Of interest is also how are we doing on snow and precipitation in Star Valley.  Again examining the Bedford 3 SE weather statipn will provide insight. The water year begins on October 1st and since then both snowfall and total precipitation are right around normal.

Snowfall total so far this winter at the Bedford 3SE station of around 110 inches compares to the record of 166 inches on the same date for the winter of 1977-78 and the low just the previous winter of 1976-77 of 48 inches.

The extended forecast is suggesting that temperatures will continue generally seasonal for the foreseeable future with near normal amounts of precipitation.